Twins of the Dead Forest (Continued)

(This is a continuation of the fairy tale started here on November 1st.)

Years passed, and the farmer, who had learned a cruel lesson, made a point of reaching out to her neighbors and fellow farmers.  She begged them all not to tell Artemis about her lost twin, and in time, many of them even forgot Salma had ever been born.  All learned to love and care for young Artemis, who grew into a strong, smart, peaceful girl with flowing blond hair and sharp aim with her bow.  Yet Artemis always felt that something was missing in her life, and shortly before her fourteenth birthday, she found the farmer in the barn, crying.

“Why do you weep, Mother?” Artemis asked.

“I just wish I knew your sister was all right,” the farmer said.  “I miss her so!”

Out came the tale of the christening, the witch, and the theft of the twin.

“Why haven’t you gone to rescue her?” Artemis demanded.  “My sister needs us!”

The farmer cowered, wiping her nose.  “I never thought I could,” she said.  “The witch was so powerful.  Don’t get ideas in your head.  I can’t lose you, too.”

But Artemis had ideas in her head.  That very evening, she tied her hair in one thick braid, slung her quiver of arrows over her back, and packed a meat sandwich in the pocket of her overalls.  With her bow in hand, she headed off into the dead forest, determined to find her sister. 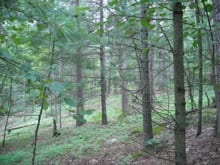 For many days and nights, she traversed the forest, searching for her sister and for any game she might shoot, but nothing lived there except the great trees, tender grasses, and a few birds that kept high in the branches out of the range of her bow.  Yet Artemis was never hungry.  Magic clung about her like invisible dust, drawn to her courage, and her meat sandwich was always fresh and replenished whenever she reached in her pocket.  When at last she came to a small cabin deep in the forest, she took an arrow out of her quiver and sat behind a tree to watch carefully.

In time, she saw a boy come out of the cabin, draw a bucket of water from the well, and head behind the cabin to a garden, where he began to hoe the beets and beans.  An old, gnarled woman came out with her cane and sat on a wooden bench, where she turned her face to the sun and closed her eyes, smiling.

The boy left the garden and went back into the cabin, emerging later with a mug of tea, which he set beside the old woman.

“Anything else, Mother?” he asked.

“Did you feed the animals yet?”

Artemis watched silently as the boy headed around the cabin toward the barn.  She longed to peek in the cabin to see if her sister was inside, but there was no way to do so unobserved, so she decided to spy on the boy instead.  Yet the moment she took one step, the old woman turned in her direction, zeroing her eyes into the forest.

“You there!” the old woman cried.  She stood, pointing her cane directly at Artemis.  “Come out immediately.”

Artemis gripped her bow tightly and notched the arrow.  Stepping carefully, she eased out of the woods.

The old woman laughed.  “Put down your bow and arrow,” she said.  “Your weapons have no power here.”

“I’ve come to free her and take her home.”

The old witch laughed evilly again.  “What makes you think your sister wants to leave?”

“Let me talk to her,” Artemis said. 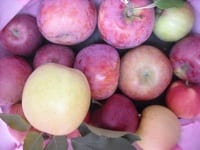 The witch took an apple from a tree that grew in the corner of the garden.

“Take this apple,” the witch said.  “I’ve transformed your sister to disguise her and keep her safe.  If you give her this apple and she eats it, the spell will be broken.  But if you give it to the wrong one, she will remain the same, and you must remain here as my own child.”

“It’s the only bargain, your birthday special, and it only lasts until the sun goes down.”  The witch thrust the red apple into Artemis’s hand.  “Go.  Your sister’s in the pasture.”

As Artemis rounded the corner of the cabin, she saw the boy in the pasture with a white horse, a gray goat, and a large black dog.

“Do you know which one is my sister under a spell?” Artemis asked.

“I have no idea,” he said, folding his arms across his chest.

Artemis approached the dog first, gazing into its eyes while it panted and looked back curiously.  She gave it a good, furry pat, and then inspected the goat, which was munching grass and shifted away suspiciously when she reached for it.  The horse nudged its great head under Artemis’s hand and watched her with gentle, doleful eyes.  Artemis tested her heart, wishing for an instinctive response to clue her into which animal was her sister, but there was no reverberating chord of recognition.  In despair, she looked again at the boy.

“If I guess wrong, my sister and I will be stuck here forever,” Artemis said.  “Maybe it would be better if I just try to kill the witch.”

“That’s extreme,” he said.  “And unlikely to succeed.”

“Do you know how long the witch has had these animals?”

“As long as I’ve been here,” the witch’s boy said.

She looked at him closely, noting his black hair and calm, even features.  He looked nothing like the witch, and she wondered for a moment what it must have been like for him, being raised deep in the dead forest, far from anyone else, and how ironic that was considering the witch had punished her own parents for not welcoming an entire community to help raise their daughters.

She frowned, looking again at the horse, the goat, and the dog.  The sun was low over the trees, and the evening light was golden in the pasture, giving even the grass a glowing, amber hue.  The animals looked perfectly content.  They would never know tomorrow that she’d ever come, but the boy would know.

Slowly she turned to him, holding out the apple.

A rumbling started in the cabin behind the boy.

He reached for the apple, regarding her curiously.  “Are you telling me you think I’m your sister?” he asked.

The rumbling grew louder.  The logs of the cabin began to split apart, and the witch began to grow out of the roof.  Her face was contorted with rage, and she was lifting her arms with claw-like fingers extended.  All of the trees around began to move in a churning, unnatural wind, twisting and wild.

Sam stared at the apple, unmoving.

He bit deep into the red apple, and the witch screamed.  With a second bite, the witch’s boy began to shake and tremble.

“Eat it all, fast!” Artemis said, and the boy gobbled in bite after bite, even the seeds, until his cheeks puffed and there was nothing left but the stem.  His throat worked visibly as he swallowed it all down.

There was a great blue flash from the cabin, and then it burst into flames.  A shrieking noise filled all the forest, and the sunlight vanished behind dark clouds.

Artemis watched as the witch’s boy twisted in agony before her, changing shape into a slender girl with wide, troubled eyes.

But there was no time to waste, for the fire from the cabin was spreading, consuming the garden and reaching out towards the pasture and the forest.  The sound of the wind lifted to a roar as the horse, the goat and the dog were blown away into the dark air.

“We have to run,” Artemis said, grabbing Salma around the waist and hurrying with her into the trees.  A path opened before them, lit with a faint green glow, and as they ran, Artemis could feel Salma gaining strength.  They held hands, speeding through the dead forest, until the flames and roar of the fire were left far behind, and there was only the silence of the path before them, beckoning them on.

Towards dawn, at last, they saw the edge of the forest before them, and the open fields and their mother’s pig farm beyond.  They paused in the shade of the last tree, and Artemis looked at her twin and the misshapen boy’s clothes that hung on her new figure.

Artemis had a moment of doubt.  “Should I have left you there?  Was it a mistake to change you back?”

Salma smiled sadly.  “I don’t know yet,” she said.

“I’ll take care of you.  I promise,” Artemis said, and taking her hand, Artemis led Salma out of the dead forest and into the sunlight.

And they all lived happily ever after.

4 Responses to Twins of the Dead Forest (Continued)