The Terror and the Trust of Not Outlining

I’m a seat-of-the-pantser.  I’ve done books using an outline before when I plotted out romances in ten chapters (major intimacy in Chapter 7) so I know it’s possible, but that is not how I wrote Birthmarked, and it is not working for the sequels.  The main problem is that I have to be in the scene, imagining it, in order to live where it’s going with Gaia.  Since she can’t see into the future, neither can I.  If the reader is to be surprised, I must be, too.  But that’s a bit of a cop-out.  The truth is that I don’t outline for Gaia because I just can’t.  My mind isn’t working that way.  I have an idea of one scene I’m heading towards with Book 3, like I had a scene I was writing toward with Birthmarked, but it’s still very open-ended, and I like the comfort of knowing it could go anywhere.  Uncertainty helps me be creative. 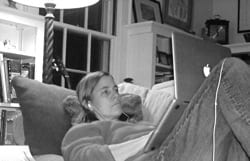 Uncertainty is also terrifying, because I’ll go in plenty of wrong directions before I find what will work.  I’ve just had a rather torturous experience writing Prized, where the first draft was 450 unwieldy pages long.  For months, I kindly referred to it as “dog rot.”  Yet I had to write it to discover what was going on.  Nine drafts later, after lopping off 50-page sections left and right and writing dozens of new scenes, the novel now has a tight plot, and I’m so happy with it that I relish the minute tinkering of the line-by-line and can hardly bear to give that up in order to work on the next book.

It has been gently suggested to me that perhaps I could write a short first draft of Book 3 just to get the blocks in place before I embellish.  Believe me.  I’d love to.  I think it will help that I’m writing full-time now, and not trying to keep the mental continuity going over 25-minute lunch breaks.  But I also know that I just have to write a first draft, whatever its messy length, because once I get to the end, I’ll be able to see the entire arc of the story, with all its surprises and holes.  I trust that this seat-of-the-pants, butt-on-the-couch process will work for me.

Just for kicks, here’s an example of how the opening of Prized changed.  In the first draft, the opening lines were as follows:

The infant took two weak, reflexive sucks on the bottle, and then her lips went slack.  Gaia shifted closer to the firelight and watched the baby’s chest for the swell that would confirm she was still breathing.

She grabbed the hilt of her knife and scrambled backward into the darkness, holding the baby close in her other arm.  Beyond the fire, the wasteland was still, as if the wind and even the stones had frozen in the night to listen, and then she heard it again, a soft chink that could be metal or a boot adjusting against pebbles.

Outlining, obviously, has nothing to do with how I write.  Thank goodness.

3 Responses to The Terror and the Trust of Not Outlining