Twins of the Dead Forest

Here’s one of the fairy tales from Wharfton and the Enclave.

Once upon a time, at the edge of the dead forest, a pig farmer gave birth to twin girls.  Her husband was ecstatic, and sent word around to all their friends and relatives that soon they’d have a christening.

“It can only be a simple celebration,” the farmer said.  “We’re very poor.”

“I know,” her husband said, but while his wife nursed the babies, he decided to slaughter one of the pigs for a roast.

“Big mistake,” the farmer said.  “Now everyone will expect an elaborate party.  We can’t feed everyone we know, not unless we slaughter half our drift of pigs.”

“We’ll keep the guest list small,” he said.  “It will all be fine.  Quit worrying so much.”

On the day of the christening, a dozen select friends and relatives crowded into the little home and toasted the two daughters, Salma and Artemis.  They enjoyed a festive time, with much singing and cider.  Later that night, after the guests had gone and the husband was cleaning up, the tired farmer lay in bed nursing her daughters and heard a scratching at the window. 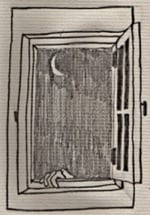 "And a small old woman crawled in."

“Someone’s there,” she said.

She crept out of bed and stepped over to pull the window open, and a small old woman climbed in.  The farmer had never seen her twisted, malevolent face before, and she shrank back in fear.

“Ungrateful girl,” the old woman said.  “Inviting only a dozen.  Don’t you know it will take everyone hereabout to raise your children?  Do you think only your favorites will touch their lives?”

“But we’re poor!” the farmer protested.

“Better to serve cups of water and good will to all than to poison those you excluded, as you have done,” the old woman said.

“We have some leftovers,” the husband said, coming in.  “We can still feed you.  Want a sandwich?”

“Fools!” the old woman crowed.  And with a flash of blue, she revealed herself to be the witch of the dead forest.

The farmer screamed and jumped up on her bed, scooping her daughters in her arms.

“I might as well destroy your whole family now and save you years of grief,” the witch said.

“I’ll take one of your daughters,” the witch said.  “You can pick which one.”

The witch raised her hand in an ominous gesture.

“Wait!” the husband said.  “It’s just one daughter,” he said to his wife.  “We can keep one.  That’s better than all of us being destroyed.  Let her take one.  The littler one.”

“Are you crazy?” the farmer said to her husband.

The witch gave an evil laugh.  “Done,” she said, and with a flash, both she and Salma, the littlest twin, vanished.