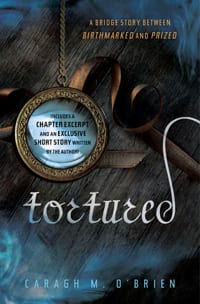 My short story “Tortured” (Birthmarked 1.5) came about as a dark experiment, the sort that goes wrong and stays with you.

At first, I was faced with a unique writing challenge.  The tie-in story was intended originally for readers who already knew Birthmarked (Book 1) but who had not yet read Prized (Book 2).  It was a precarious window.  I pondered: how could a story add something to both books and yet stand alone enough to work as a short story? When would it take place?  Who would it be about?  How could it not be a spoiler?  It couldn’t simply be a misplaced chapter.  It had to matter.

At the time, I had been routinely receiving emails from readers of Birthmarked who asked about a certain character, one who was doomed to suffer.  A visceral, pivotal scene began to formulate at the edge of my mind, and I had this insidious feeling I’d be forced to face it.  I didn’t want to.  I’d been creeped out enough by the twisted dungeon stories of opium-loving, cousin-marrying Poe, and I had little desire to explore the parallel side of my own mind.  Yet the more I resisted, the more I felt this powerful urge to see where my own dark side could take me.  Besides, I cared about my character.

So I started with this murky prison scene, and as it sucked me in, I followed along, letting events materialize before me.  It was told from a new perspective, not Gaia’s, but the setting felt deeply familiar.  I wrote with no concern for explaining anything to anybody because I assumed the characters and my reader knew all of the first novel as back-story, complete with its events and relationships.  A spare character from a story I’d written for my blog spontaneously came down the stairs when I needed him.  Working in reverse, I culled details from a character’s memory in Book 2 so the story would have satisfying continuity, backward and forward in time.

Despite its grimness, it was incredibly fun to write.  As I revised, I found holes, and then my editor found many more.  I had explaining to do, after all.  The story went through half a dozen drafts.  Then it went through copyediting and proofreading, just like the process for a full-length novel.  The art team worked on a cover, and when I said I wasn’t keen on my title, my publisher proposed a new one: “Tortured.”  “Ew!” I thought, squirming, and then realized that it fit.

How on earth did I, sunny as I am, become the writer of a story called “Tortured”?

If you’re curious about the timing of this story, I can tell you it was originally intended to be e-published for free in October, a month before Prized was released.  That’s the part of the experiment that went wrong.  Ironically, though neither my publisher nor I will earn anything for the story, we still needed a contract for it, and since this was new ground legally, vetting the one-page agreement took longer than expected.  In the end, however, I think this timing is fine.  It will work to read the story before or after Prized because it adds a layer, either way.  Now the story matches these dark, gray days of December.  I would read it curled up beside the fire.

What stays with me about this dark experiment is how it changed the way I see my “Tortured” characters, not to mention myself.  Now that I’m revising Promised, Book 3 in the series, this new perception is useful.  I know my characters better for having stepped outside the novels and spent one key night with them.  Like campers who sneak out for an ill-fated tryst after lights-out, the characters from “Tortured” and I share a special bond.

“Tortured: A bridge story between Birthmarked and Prized” is available on Kindle and Nook for free, starting Tuesday, December 6th.  It will also be featured on Tor.com on Thursday, December 8th, for those without e-readers.  Be warned: the story is a spoiler for Birthmarked, so read it at your own risk.

27 Responses to On Writing “Tortured”