Readers tell me that Birthmarked makes them hungry.  They read about dark, crusty bread right out of the oven and their tastebuds swoon.  Unlike Harris’s Chocolat, that richly seductive book that makes me crave sweetness, (not to mention the even more troublesome movie version with Johnny Depp and Juliette Binoche, (whose name, once you’ve become dessert-minded, invokes “ganache”)), my books tend towards the hardy and wholesome food groups: breads, soups, blueberries, and an orange.  An exception is the mycoprotein, provided as sustenance to people living outside the wall.  It exists now in real life as Quorn, but I’ve never tried it.  In Prized, one of my favorite chapters is called “Cinnamon,” for a scene where the absence of cinnamon in Sylum has caused a longing for it.

In real life, I’m an adequate cook.  I’m good at boiling food.  This means food poisoning is rare, but then, so is flavor.  Beyond the basics, though, I do have a couple of dishes I like to make, and one of them is a wild rice soup recipe I’ve adapted over the years to make my own.  It’s exactly the soup I imagine in Prized, only I use Minnesota wild rice for the fictional black rice.  It goes well, you won’t be surprised to hear, with fresh bread. 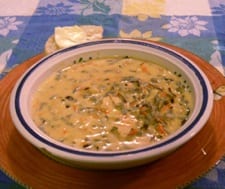