The Vault of Dreamers Map 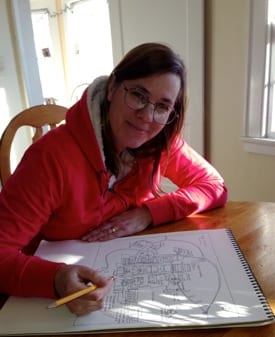 My new novel, The Vault of Dreamers, takes place at the Forge School, an elite arts academy where every student is perpetually filmed for a reality TV show.  The isolated campus of the boarding school is in the prairie of Kansas, where future weather fluctuates between tropical rainstorms and sunny, cool fall days.  The setting, with its thousands of cameras, simultaneously bolsters the fame of the creative students and robs of them of their privacy.  That mix of pressure is a key element for character development and for plot.

In rather the same way that I developed Wharfton and the Enclave for Birthmarked,  creating my fictional world for The Vault of Dreamers has involved envisioning the campus.  I sketched out the earliest draft of a map of the Forge School last December, when my editor asked if I had a layout for the buildings, and since then, I’ve tweaked the map as I revised the novel, shifting buildings to keep them consistent with the text.

This weekend, I finally had a chance to draw out a proper map of the Forge School campus, with the intertwining roads, buildings, towers, and gardens.  It was a curious, satisfying exercise. I’ve always liked it when books have maps, and while I’ve never seen a book map quite like this one, I think it suits.

I like how innocent and unassuming the campus looks.  I like what it doesn’t show.  I’m also interested to see if the art team at Roaring Brook will have ideas for taking it to another level.

Tagged: map, the vault of dreamers

4 Responses to The Vault of Dreamers Map