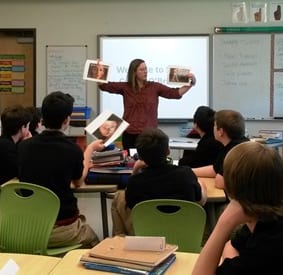 I had a great visit with 38 Eighth Graders at the Annie Fisher STEM Magnet School in Hartford this winter.  The students, in a unit on dystopian societies, had a choice of reading Birthmarked, The Hunger Games, or The Giver, and we tackled student questions like, “Do you think our society is becoming more dystopian, or less?”  (More, was the consensus, but we have no shortage of hope for the future.)

Let me tip my hat to teachers Stefanie DeLuca and Keith Sevigny, who have a dynamite rapport with their students and prepared them well.  The eighth graders had written questions to ask me, and whenever I turned a question into a discussion, they were good at building on ideas.  When a student asked if a character in the novel was based on me, it led me to explain that my father’s death had informed the writing of a particular scene, and when I asked if other readers had experienced a death in the family, half a dozen of the students raised their hands.  It was a risky, vulnerable thing to do in a classroom, but I so valued that moment of honesty.  A book can be a touchstone for difficult experiences, and in that instant of looking around the room, we knew we were not alone.

I brought along a dozen different cover concepts that were designed for the book before the team at Roaring Brook settled on the artwork, and the students had tons of ideas about them as we passed them around.  It’s interesting to think about what concepts in a book need to be captured for the cover, and how different covers appeal to different readers.  We agreed, for instance, that the covers with babies on them were turn-offs to many of the boys in the class, which was a conclusion my publisher had reached, too.

Finally, we had a chance to do some writing.  I suggested two topic options: #1 Begin a scene where a character (human, non-human, old, young, whatever) is using a tool (saw, lawn mower, machine, whatever) and use all five senses in the scene (taste, touch, hearing, smelling, sight); or #2 Anything.  We wrote in dead silence for 8 minutes, then swapped papers, and then volunteers read aloud.  The students were awesome!  So many kids wanted to read that we extended our time to hear more voices.  It was great to see where their minds could run.

Let me say thanks again to the students, and to Stefanie DeLuca who invited me in.  You all were inspiring!