The Potters’ Daughter: Emily at Twelve

This is a bit story about characters from the world of Birthmarked.  I wrote this “new beginnings” story in honor of Eve’s Fan Garden, which is celebrating its one year anniversary this week.  I’m also joining their live chat on Thursday, January 20, at 8:30 EST if you’d like to drop by.  Happy Birthday, Eve’s Fan Garden! 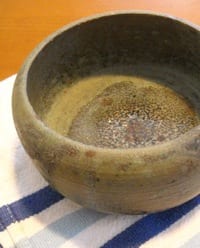 As Emily braced her palm against the pottery wheel and started it spinning, her foot picked up the rhythm of pressure on the treadle to keep it going.  Wet, mobile clay spun beneath her hands and she concentrated to keep it centered in a circular mound, small enough so that her thumbs met easily over it and the slickness smoothed in a supple form inside her fingers.

“What are you doing working so late?” Gaia asked.

Emily kept her gaze on the spinning gray clay, but she heard Gaia coming in the door to her left and walking around the little studio, blocking light from one lamp after another as she moved.  Gaia slunk down the wall to sit on the floor, just at the edge of Emily’s peripheral vision.

“I’ll splatter you there,” Emily said.

The wheel made a steady hum.  Emily pressed her thumb down in the middle of the clay and gradually worked the indentation outward toward the edge, where she pulled up a lip of clay to form a thick, small bowl.  She grabbed a wet bit of sponge.  Frowning, she leaned over to peer at the form at an angle while she smoothed outward from the center again, easing her wet sponge inside the spinning shape, applying equal pressure to the outside edge of the bowl as she firmly, delicately modified the shape.  She lifted her hands away, watching the little bowl spin, and then finally took her foot off the treadle.  The wheel spun slowly down to silence, and Emily wiped a strand of loose hair back off her forehead, not caring that she was smearing a trace of clay along her face, too.  She was already filthy.

“I have five more of these to make tonight.”

“Why aren’t your parents making them?”

“They worked all day,” Emily said.  “My dad had to use my wheel because his was broken, so now it’s my turn.”

“You know how it is. Way too much work or not enough.  We have to get it while we can or they’ll go to another potter.”  Emily reached her arms over her head to stretch.  “I can’t talk long.”  She looked at Gaia closely for the first time, noting both the tired slump of her shoulders and the radiance in her expression.  “Were you delivering a baby with your mom?”

Gaia nodded.  “It was great.  A little girl.”  She smiled, hugging herself.  “It’s just the most amazing thing.”

“She was so little!  Right here in my hands,” Gaia said, holding them up reverently as if she could still feel the invisible infant there.

Emily reached for a wire to slide under the bowl to cut it from the wheel.  “You’re lucky you like your work.  Bring me that board, will you?”

Gaia stood to reach for it and passed it over.  Emily gingerly lifted the bowl onto the board where it would dry and harden.

“Look at how pretty that is,” Gaia said.  “I could never make that in a million years and you just tossed it off.”

Emily could see nothing graceful about what she’d just made.  Competent work that would satisfy her mother; that’s all it was. “It’s passable.”

Gaia laughed, and then her smile faded.  “You’re serious.  Look, if you don’t like working as a potter, why don’t you tell your parents?”

Emily cleared off the wheel and reached for another block of clay that she’d pounded for air bubbles, and gave it a couple more smacks before she settled in the center of the wheel and wet it down.

“Emily,” Gaia said, “don’t ignore me.”  She was sitting on the floor again and she gave a little wave.

“I’m not ignoring you. This is the only thing I know how to do.”

Emily started the wheel again, and the awkward, lumpy clay jerked under her hands, resistant and stubborn.  She made her hands strong and forced the clay to yield until it gradually morphed into a small, symmetrical mound that spun evenly.  The basic, pre-bowl shape.  She could close her eyes and feel it in her sleep.

“I mean it, Emily,” Gaia said over the noise of the spinning.  “You could quit this.”

Gaia laughed, and Emily released the clay to look across at her.  Sometimes she hated the way Gaia could see right through her and laugh at the same time.

“Okay.  I may be miserable,” Emily admitted.  “But there are worse things than being miserable, and I don’t need you coming in here telling me I have choices, because I don’t.”

Gaia shrugged.  “You could be a midwife like me, or a weaver, or a teacher, or own a restaurant or a store or anything.  You’d be a great teacher, actually.  You’re super smart and patient.”

Emily scoffed out a laugh and kept her foot going on the treadle of the wheel so the clay spun before her.  “A teacher.  We don’t even have any schools in Wharfton.”

“You could change that.”

Emily laughed again.  “I can’t read.  Remember?  Do you know any teachers who can’t read?”

Gaia came to her feet again.  “I’ll teach you.”

Emily reached for her sponge and dipped it the water.  “We tried that once before, remember?  That stupid silent ‘e’ thing?  No, thanks.”

Gaia came nearer, crowding Emily’s light.  “We’re older now.  I hardly knew how to read myself back then, but now I do.  At least look at me.”

Emily bit inward on her lips and kept her focus on the spinning clay, but as Gaia continued to stand there, waiting, and Emily contemplated making more bowls like the last one every day for the rest of her life, she allowed herself to look up.  Gaia’s kind, challenging expression was almost more than she could stand.

“Could you really teach me?”

“You won’t make me feel stupid?”

Gaia leaned nearer and set her clean hand on Emily’s slick, dirty one.  Emily took her foot off the pedal and let the wheel spin down to motionlessness again, and the little studio had never been so quiet.

“Watch,” Gaia said.  “It’s just putting together sounds.” Slowly, carefully, guiding Emily’s own finger to make the marks, Gaia drew a word in the muddy clay that covered the outer surface of the wheel in a gray film.  “This is a ‘Y.’  It sounds like ‘y-y-yellow,’” Gaia said.  “And this is ‘E,’ which is the start of ‘Emily.’”

“I know that one,” Emily said.

“And this one’s ‘S,’” Gaia said, still guiding Emily’s finger.  “It’s the snake letter, making the ‘s-s-s’ sound.  Put the three letters together, and you get an entire word you know.”

Emily pulled her hand free to trace the letters again herself, sounding them out softly.  When comprehension came, she couldn’t say it.  She could only think it, deep in the loneliness of her own heart: yes.

She didn’t want to move.  She didn’t know what to say.  She should have been grateful to Gaia, but somehow she felt enraged.  Reading was so simple.  Why hadn’t her parents let her learn?  Many, many times Gaia’s parents had offered to teach Emily along with Gaia, and every single time Emily’s parents had declined, too proud to be in their debt.  Worst of all, they’d also taught Emily to be too proud.

Now she moved her hands to the pile of clay on her wheel and slowly gripped her hands into it, ruining her work.  She wanted to throw it, to smash everything around her, but instead she slumped backwards on her stool and hid her face in her messy hands.  All she could see was clay, all she could smell was wet clay on her hands.  She closed her eyes tight.

Then she felt her friend’s arms go around her and this girl, this neighbor girl that Emily had once secretly pitied for being so ugly and friendless, now seemed more powerful than any other person on Earth.

Emily held onto her.  There was really nothing else she could do.  “I’ve tried so hard,” Emily said.

“I know.  You’re such a good person.  You work so hard.  This won’t change that.  We won’t tell your parents until you really can read, okay?  Whole books.” Gaia let go of her to peer at her, still visibly worried, and Emily nodded, wiping at her face with the corner of her smock.

Whole books, she thought.  It hardly seemed possible, and at the same time she felt both famished and exhausted.

“You’ve got clay all over you now,” Emily said.

Emily laughed.  “I still have five bowls to make,” she said.

Emily was already scraping the destroyed clay off the wheel so she could start fresh with a new pile.  For an instant she was afraid to smear away the word she’d learned, but then she realized she knew it.  For good.

She started up the wheel again as Gaia slipped out the door.

7 Responses to The Potters’ Daughter: Emily at Twelve