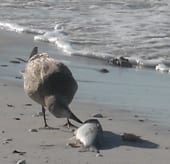 When you keep erasing as many pages as you write each day, and you keep going in wrong directions, don’t think that you’re not making progress, because you are.  It’s just thinking progress, not pages progress, and when you eventually identify that you’ve put your main character in a position of power and influence where her problems are global rather than personal, then add in some guards and get someone arrested, preferably her.

You might think you would know by now the absolute basic rule of fiction: make things worse.  But no.  It kills you to think how many times you keep having to learn this.  What’s more: it’s not enough to make things worse in general; they have to be worse for her.  Much worse.  And now.

At least you learned it again this morning.  Evil laugh.

4 Responses to Note to Self