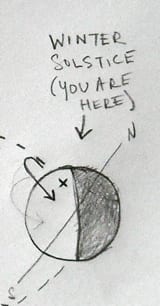 Some days, when the sun hovers over the horizon for barely nine hours, I can feel our planet swinging through its black orbit. The sunlight is a sparse, white, cloudy force coming from the south, replacing all that was once green with motionless gray and white, and I can feel the slow, huge, roll of the Earth.

I love the solstice. It’s one of the things I’ve been sure of since fourth grade, when I first learned the importance of December 21st, March 21st, June 21st, and September 21st, leaving out leap years.  I like the extreme night in the Earth’s shadow. I think about the north pole, where the sun goes down for months, and then reappears to hug the horizon all 360°, and then gradually spirals upward overhead to circle around and around for six months before setting again.  Do you call it a day when sunlight lasts for months, when you only have one day and one night a year?  Can it even feel like Earth?

Sometimes, this time of year, you don’t have to go far to feel like you’re on an alien planet.  Colored lights and bells appear in strange places.  It’s equally possible to discover that the world has remained the same and you’ve become the alien.  It happens to me.  I look up, lost at a party of strangers, to discover we can spot each other, we fellow aliens.  There are more of us than I ever knew. 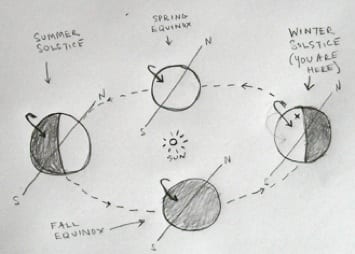 The Earth in 4 Key Places. Note the Light for the Solstice. Not to scale.

Tonight at 11:38 (Universal Time (we have Universal Time?)) the earth will reach the solstice and we in the northern hemisphere will start back towards the light.  The tilt of the Earth remains the same, of course, steadily pointing toward the North Star.  It’s just the angle of the tilt compared to the sun that will change as the earth revolves.  Add in the fact that the Earth bulges and wobbles, so that the sunrise will come later some mornings even as the days begin to lengthen, and you’ll find it’s an imperfect, quirky process, really.  There are subtleties that only matter if you trust the clock.

I can’t help wondering what would happen if the days just kept getting shorter.  How soon would we notice if the solstice didn’t turn us back?