Rita tapped on the schoolroom window and Leon looked up.  She waved to beckon him out, frowning.  “Come on,” she was saying clearly.

He shook his head, but a moment later she poked her head in the doorway.  Leon was alone at his desk in the back, rewriting the words he’d spelled wrong that morning: Attached, barrel, embarrass, necessary, thorough, tomorrow, wrong. 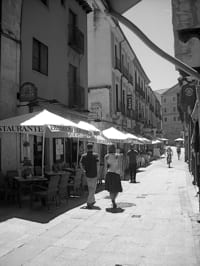 “I can’t come. Not until I’m done. Tell Jack and the others I forfeit.”

“It won’t be any fun without you,” Rita said.

He stared at his eraser.  It was going to be bad enough when his father found out he’d failed another spelling test.  He couldn’t skip out on detention, too.  He shook his head again.  “I can’t.”

There were footsteps in the hallway, and then Jack showed up in the doorway, too.  He had his running shorts on and his new sneakers.

“You’re not still here,” Jack complained.  “Can’t you tell time, either?  It’s been over an hour.”

“It’s two hours today.  My dad said to double it if I failed another test,” Leon said.  “And you’d better go.  If Chewels finds you here, I’ll be in worse trouble.”

Rita came nearer, so that he could feel her looking over his shoulder, and he covered the words with his hand.

“I can now,” Leon said, keeping his head down.

She laughed again and took his pencil out of his grasp, tossing it to Jack.

Jack backed towards the door. “Come and get it.  In fact, I’ll race you for it.”

“Don’t be a jerk,” Leon said, crossing his arms.

“I’ll make it easy for you.  Instead of starting at Summit, we’ll start here.  Just from here to the South Gate and back.  It’ll take fifteen minutes, max.  They’ll never even know you were gone.  I’ll get the other guys.  Just say the word.”

Leon turned to look out the window to the blue sky.  Afternoon sunlight touched the wall on the other side of the playground with a yellowish glow, and a janitor was sitting out on one of the swings having a smoke.  The teachers had probably all gone home ages ago.  He glanced up at the clock.  Thirty-four minutes more.

“I can’t,” Leon said. He wasn’t going to explain about his father. Jack ought to know by now.

Jack tossed the pencil in the air, caught it, and then brought it back to set it precisely in the dip at the top edge of Leon’s desk.

“Leave him alone, Rita,” Jack said.  He was backing up toward the door.  “He wants to be a martyr. The guys are waiting. See you, loser.”

“I’m not going,” Rita said.  She sat in one of the chairs at the front and slouched back in it.

“I’m not bothering anyone,” Rita said.

“No, he’ll get in trouble if you’re here with him,” Jack said.

She made an amazed face.  “You think I’m cute.  I’m not going to forget that.”

Leon wished they would both just go.  He looked back out to the playground and the janitor was gone.  He reached slowly for his pencil, but his concentration was completely shot.

Leon looked up, and heard the janitor coming down the hall with his pushcart.

Rita came to her feet.  “We were just going,” she said, as the janitor glanced in the doorway.

“You’d best be doing that,” the janitor said mildly.

Jack made a quick apologetic face toward Leon, and then took Rita’s arm.

“I’m coming,” she said, pulling free.  “See you later, Leon.  You’d better not be in detention for the next race.”

He watched them go, hearing Jack’s new sneakers squeaking on the clean floor.  The janitor came in with a wide broom, weaving it slowly among the desks and chairs.  Leon returned to his spelling, aware of the man’s movement up one row and down the next, until he turned around behind Leon’s desk and started up along the windows.  At the front, the man emptied the garbage can into a larger bin, and then tucked the can back beside the teacher’s desk with a hollow clang.

“Are you fast, then?” the janitor asked.

“You have the look of it,” the janitor said.

Leon looked at the clock again.  Nine minutes yet to go.  The other kids were probably starting about then.  He scrunched his forehead into this hand and gripped his bangs.  He hated his life sometimes.  W-r-o-n-g.  He wrote it again and again.

He didn’t notice when the janitor left, but when he next looked up at the clock, the time was up.  He sifted his papers together, rose slowly from his desk, and put his work on the teacher’s desk.  He took the spelling test with the F, folded it small, and stuck it in his back pocket.  His father would ask for it later, he knew.  He walked slowly down the long hallway, following the long white reflections from the open door at the end, and when he reached the entrance, the janitor was waiting for him there, having another smoke.

“Time’s up,” the janitor said.

“I didn’t do nothing for you.”

“You going to run?” Ben asked.

“The race is over,” Leon said. He wondered if Jack had won, or Rita.  He hoped it was Rita. “It’s no big deal.  There’ll be another one next month.  It’s just a thing we do.  There isn’t even a prize.  It’s just for pride, to see who’s the fastest.”

“You’re still going to run, though, aren’t you?”

Leon frowned, looking up at the man.  Ben drew on his cigarette again, squinting down at Leon.  A puzzling lightness began inside Leon.  He glanced down the hill.  He couldn’t see the South Gate from this angle, or the wall, but he could see the unlake stretching toward the horizon, pale blue with distance.  He could run.  He didn’t need a race in order to run.

Ben laughed quietly.  “On your mark,” he said.

Leon flew out of the school yard, banked left, and raced down the cobblestone road.  At the next corner, he grabbed a lamp-post to spin hard to the right and pushed downhill at top speed. He had to weave to avoid a man with an empty cart and then a boy on a bicycle with loaves of bread, but he didn’t slow down.  Grinning, he flew even faster, while his lungs burned and the air whipped past his face.  He nearly collided with a door when it opened suddenly before him, and instead ducked under a shop awning and leapt over a barrel there.  By the time he could see the South Gate before him, he was running faster than he ever had before.  He knew it.  He could feel the sprinting power in his knees, and he made no attempt to slow, not until he’d passed the invisible finish line, and then he let himself slam into the archway of the gate and lean over there, laughing and gasping for breath.

None of the others were there any more. He looked around for them, but they were all gone, and only a couple of soldiers were watching him as if he’d lost his mind.  Leon blinked, his mouth still agape as he sucked in breath, and then he lifted his head to look out the open gateway, to the roofs of Wharfton and the unlake beyond.  He put his hands on his hips, swallowing thickly.

Someday, he thought, he’d be good at something, and not just running.  He’d be able to look at his father and know he wasn’t disappointing him.  He touched a hand to his back pocket to be sure the spelling test was still there, and then he turned.  The top of the obelisk was partially visible between the nearest buildings.

His muscles were burning in a good way, and his heart pumped hard, making him smile.  He started up the road toward the Bastion, and all of the world was slow and breathtakingly clear around him.

15 Responses to Detention: Leon at Twelve