Birthmarked wasn’t in the slush pile for long—two months—but that’s where it started.  What I knew about the process of trying to sell a novel was based on my failures with my literary novels (see previous post: Slush Pile Code) and my success with six romances I’d published (agentless) before I became a teacher.  I had no experience with children’s publishing whatsoever and no contacts, but there’s a way in for unknown people like me: through the slush pile.

I knew one thing for certain: the only way my book would get noticed was if it was genuinely good enough to merit attention.  That seemed fair to me.  Though I didn’t expect to succeed, I wanted the self-respect that would come with knowing I tried to sell my novel.  My work deserved that much. 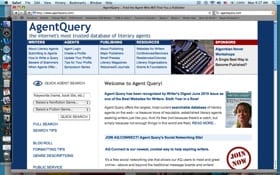 So here’s what I did.  Once I had a complete manuscript of Birthmarked, to start my list of potential agents, I went to the library, looked up the latest YALSA Best Books for Young Adults list, pulled the available novels, and checked acknowledgement pages for writers who thanked their agents.  For more leads, I bought a copy of The Writers Market, read its section about agents, and searched online for lists of the best agents for YA novels.  Then I searched the AgentQuery.com database for four criteria: agents who represented YA, accepted email queries, were open to new clients, and were members of the Association of Authors’ Representatives (AAR).  I checked agencies’ websites to read about the agents and what sorts of books they represented, studied their submission requirements, picked the agents that best matched my work, polished my query letter, customized it for each agent, and contacted sixteen agents by email.

Done, I thought.  That same afternoon, one of the agents replied and asked to see the first fifty pages.  I sent them along, and four days later he emailed back to say he thought the book was good but he didn’t know whom he would send it to, so he wished me luck, recommended I check out Jeff Herman’s Guide, and passed.

No surprise there.  I thought, this is going to take four years and no one will ever want the book, so I might as well maximize the speed of rejections and expand my search now.

I went back to AgentQuery.com and dropped the AAR criteria because, on further reading, I’d learned that plenty of legitimate agents didn’t bother with the AAR credential.  I spent another three weeks researching individual agents like I had with my short list, tightened my query letter again, and sent out a second batch of email queries to twenty-five more agents.

The next day, I started receiving requests for the complete manuscript.  Within a few weeks, eleven agents had requested partials or the complete manuscript, which seemed like a lot to me.  Since they didn’t ask for exclusive looks, I didn’t mention that other agents had also requested the manuscript.  I thought I might sound pushy if I did.  I did start to worry, though, about the etiquette for handling it if more than one agent offered representation, so I studied articles about that on AgentQuery.  I calmed down again.  It almost never happens.

Then I received an offer of representation.  It was three weeks after I’d sent out the second batch of queries, and this agent was excited about my book.  He thought it was great.  We talked for a while, and then I explained that other agents were considering the manuscript and asked for a little time to check back with them.  He said that would be fine, and to let him know if I had more questions.  We politely hung up.

Agents, I found, were very courteous, hard-working people.  When I emailed the others who had the manuscript to say I had an offer of representation, they responded within hours.  They were very patient with me and their colleagues while I waited for other agents to read the manuscript and make an offer or not.  The ones I spoke to all believed it mattered to find a good author-agent match and agreed it was worth taking the time to consider carefully, even if that took a couple weeks.  So I did.

After talking to five of the interested agents, I ended up with four offers of representation. Then I had to decide, and I didn’t know what mattered most: experience, a list of award-winning writers, a specialization in children’s lit, the size of the agency, a strong foreign rights department, or an ability to represent adult novels too should I want to return to that.  I asked questions and took notes during the phone calls.  The agents connected me with some of their clients and to a retired editor so I could talk to them, and I learned a lot, fast.

I ended up with Kirby Kim of Endeavor, shortly before it merged with William Morris, and a smarter, nicer guy you’ll never find.  In my opinion, that’s when I made it out of the slush pile, because that’s when I gained an ally to represent my work.  Kirby guided me through three fairly light revisions, and then in late October, 2008, Kirby submitted my book to fourteen editors.  That waiting time was the most stressful.  I had no idea how long it would last or if we’d get an offer, and the stakes felt high.

A few weeks later, Kirby said he was getting some interest.  He set a deadline for offers at 3:00, the Friday before Thanksgiving.  I hurried home from school to be there for a phone call, and I distinctly remember looking out the kitchen window, half sick with hope and doubt, praying that someone would buy my book.

Kirby called at 3:15.  We had three offers for Birthmarked, and the best offer, from Nancy Mercado at Roaring Brook, was a three-book deal.  It was beyond belief.