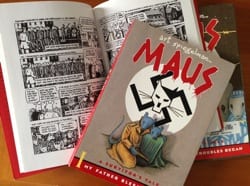 *Spiegelman’s lecture has been postponed to Monday, March 24, 2014.

Two upcoming events I’m excited about are the opening of the Ballard Institute and Museum of Puppetry at Storrs Center this Saturday, March 1st and Art Spiegelman’s talk “What the %@&*! Happened to Comics?” at the Jorgensen Monday, March 24th.  Both events are free and open to the public, and I can’t wait.

Naturally, I’m a little scared of traditional puppets, but I love how weird and creative contemporary ones are.  The Ballard puppets are world renowned for their innovation and grace, and the opening will feature the premier performance of Anna Fitzgerald’s Reverse Cascade at 1:00 pm.  The official ribbon cutting happens at 2:00.  The Ballard Institute abuts the new UConn Coop Bookstore in Storrs Center, and shares its Black Box theater space.  Incidentally, the Coop has a new creperie, Le Petit Marché Café, just in case, you know, anyone wants a crepe.

I was first blown away by Art Spiegelman’s Pulitzer Prize-winning Maus a decade ago, when I fell into his gripping, snide, heart-breaking story of the Holocaust.  It was my first real graphic novel, and it has haunted me ever since.  I can’t believe the artist I admire so much is coming here, to Storrs, where I can gawk and listen to him in person.  Spiegelman’s lecture starts Monday night at 7:00 in the Jorgensen Center for the Performing Arts on the UConn campus, and again, it is shockingly free and open to the public.