A Smashing Opening of a Favorite Bookstore: The UConn Co-op 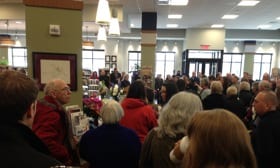 Book lovers flocked to the Grand Opening of the UConn Co-op Bookstore at Storrs Center, CT, this weekend.  The ribbon-cutting event jointly celebrated the opening of the Bookstore, the Ballard Institute and Museum of Puppetry, and Le Petit Marché Café, which share the contiguous space.  More people came than were expected Saturday afternoon, March 1st, and the celebration was super fun. 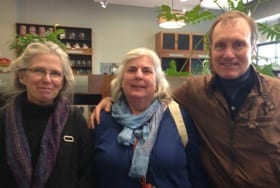 Writer and Manager of the General Books Division at the Coop, Suzy Staubach, with friends Nan Sorensen and George Gibson.

After welcoming speeches from notables including Suzy Staubach, John Bell, and Sally Weis, members of the community took tours, browsed, and sampled French pastries from the café.  Local authors Wally Lamb, Sam Pickering, Ellen Litman, and a dozen others mingled with friends and readers.  Meanwhile, the UConn a cappella singing group, The Chordials, performed several contemporary numbers, and a live jazz combo followed. 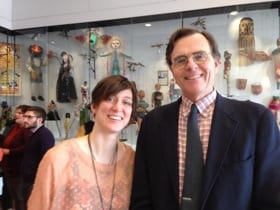 Director of the Ballard, John Bell, with Sarah Nolen.

On the puppetry front, Anne Fitzgerald’s two performances of her new puppet arts production, Reverse Cascade, were filled to capacity, and the new exhibits featured exquisitely detailed puppets and photographs highlighting the history of puppetry.  I was especially delighted by a photo of Maggie Gyllenhaal and Muppet friends defining the word “Surprise!” 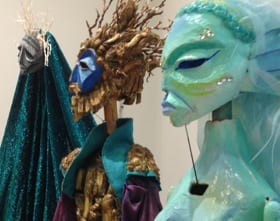 Distinguished members of the Ballard Collection

Let’s face it.  Readers in our corner of Connecticut have long been fans of the UConn Coop Bookstore, but now that it has more of a chance to breathe in its new location, it’s better than ever.  What other bookstore shares space with puppets and cinnamon banana crepes?  Saturday’s celebration showed again how books, art, music, friendship, and a little sweetness are at the center of our community.  Congratulations!