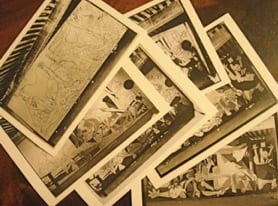 In the Reina Sofia Museum of Madrid, in the white-walled gallery that showcases Picasso’s Guernica, across from the masterpiece is a series of six photos Dora Maar took of the painting while it was in progress.  If you have the stubborn tenacity to thwart the crowd, you can stand in front of each photo and examine it closely, then go on to the next to see what Picasso changed and what he kept the same.  The horse rises.  The eyeball light emerges from a sun shape.  Shadows and flames appear.  The corpse-like figure at the bottom switches direction from head to toe.  The horror and loss and anger intensify painfully with each draft.

When I saw the painting and the photographs this summer, I was inspired and troubled, but also enormously relieved.  Here was proof that an artist did not know, at the beginning, how things would turn out at the end. Clearly, Picasso had powerful ideas right from the start, but he was willing to change them, and change them again, and let a change on one part of the canvas set off an effect elsewhere.  He didn’t just polish in a delicate way.  He massively reworked the canvas, and only near the end did he fine-tune the details, like the texture of the horse hair.

I don’t paint and I’m no genius, but I do write novels, and I swear the process is the same.  My first draft of my latest novel contained a middle-aged woman who changed to an old man with a peg leg, and a horse rancher who became a mortician.  Four other characters disappeared completely, taking their problems with them.  In the third draft, a new ending replaced the pre-existing sixty pages.  A birth scene was given to a different pregnant woman.  A final chapter was added, and massive stream-lining happened everywhere.  In the sixth draft, a key character who had consistently appeared on page 150 surfaced earlier on page 72, influencing everything in between.

When I discussed my latest draft of Prized, the sequel to Birthmarked, with my editor last week, I discovered that an issue which has hovered at the edge of the book for over a year could come forward and significantly alter the story.  It has meant scrapping fifty pages yet again, writing several new scenes from scratch, and rippling the repercussions through the rest of the book.  One character’s pivotal choice makes me re-see and grapple with the entire novel in a new way, as I never could have before I reached this point, and this is my eighth major draft.

A book isn’t as smart as a writer is at one moment.  It isn’t the performance of a gymnast whose skill learned over years must be demonstrated perfectly in one 60-second routine.  Not even Picasso could paint Guernica right the first time.  A book is the work of a writer’s ideas in layers, over time, and so I take comfort in knowing I can revise.

2 Responses to Learning Revising from Picasso