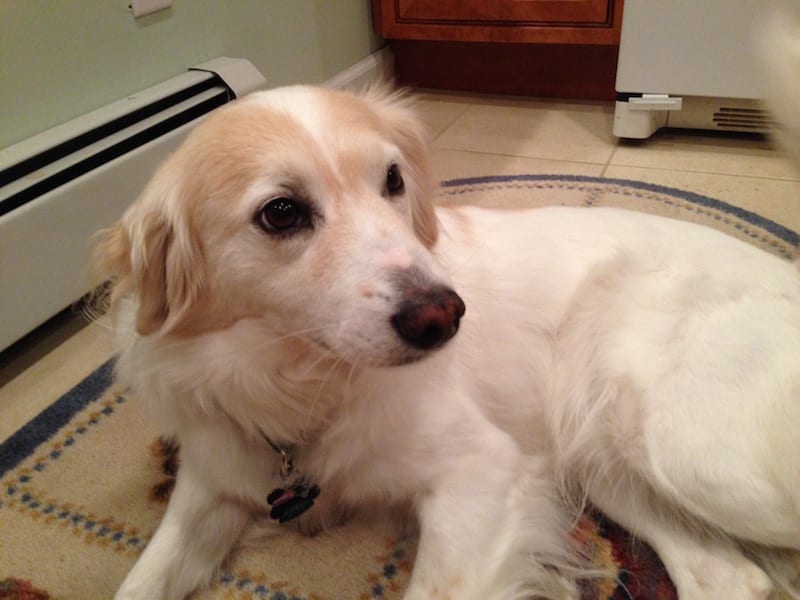 I don’t have a dog, but my daughter does, and he’s a rescue named Waffles. Let me tell you about Waffles. Before Waffles came into our life, I was afraid of dogs. Stop me if I’ve explained this before. My fear dated back to my childhood when my family had a golden retriever named Mike the Dog who jumped on me a lot when I was trying to feed him. Dry dog food, wet dog food, water, and a raw egg would spill down my blue school uniform, and Mike the Dog would keep happily jumping at me because he was hungry for affection (and food) and not well trained. It’s funny now, and sort of sad. In truth, I wish I could go back and time and give Mike the Dog a good ruffling around the neck and shoulders. He was a good dog, but to a little kid, he was also scary. Then he died, which is a whole nother horrible story.

Anyway, I’m an adult now, as I like to remind myself, and Waffles is small, gentle, and calm. He likes to hang out with me on the couch when he visits. He’s friendly. His poops are small. Being around him has helped me learn that most dogs are harmless, so when I see one approaching me on a sidewalk, I don’t automatically go into deep inner fear mode anymore. It’s nice to be cured.

So, when I needed a dog name in The Rule of Mirrors, naturally I borrowed Waffles’ name. It’s a better dog name than Mike the Dog.