NY Comic Con: Quite the Scene 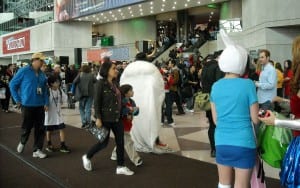 Big crushes of people packed the Javits Center this weekend for NY Comic Con 2012.  What did 100,000 people feel like?  A lot of fun.  Especially since many of the people were dressed in savage, colorful, and sometimes flesh-baring costumes.  Our favorite?  A little boy came as Bumblebee in a homemade, cardboard, yellow outfit and when he knelt down and curled up, he transformed into a car.  Ingenious. 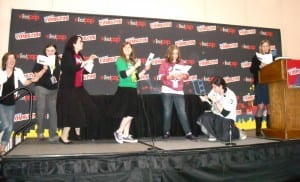 I am deeply indebted to Katie, S.T., Rufka, Lainey, Chelsea, and Mindy, the volunteers who joined me on the Unbound Stage to act out the first chapter of Promised.  It was a dangerous and action-packed scene involving many invisible weapons, precarious heights and heart-rending drama, but my bold volunteers were unfazed.  With zero preparation, they rose to the challenge to produce an awesome, super funny scene.  I only wish it had gone on longer.  I only wish we were still there. 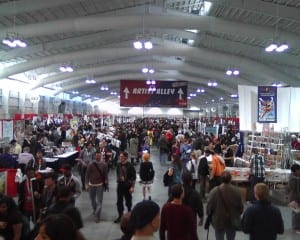 Other highlights included meeting Cecil Castellucci in person after years of email correspondence, seeing fellow MacKids writer Tommy Greenwald with his trademark dry humor on a MG Lit panel, browsing through Artist Alley, meeting up with my agent Kirby Kim to chat, signing books at the table next to Veronica Taylor (the voice of Ash. I actually heard her say “I choose you!”), and hanging out with my fabulous family.

Would I do it again?  In a heartbeat.

2 Responses to NY Comic Con: Quite the Scene