Late one night, at the cabin way up north, we heard a truck coming along the driveway when a truck wasn’t supposed to come.  My mother pulled on her boots, loaded her rifle, and told us, “Stay in the house, kids.”  Then she stepped out on the front porch with her gun and our dog. 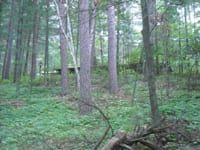 My brothers stayed in the bedroom, but I crept to the kitchen window and peered over the sill to see her standing under the porch light in her Lanz nightgown, with her long black braid falling down her back.  Our golden retriever was normally too good natured to be a threat, but as he stood beside her, facing the drive, he wasn’t wagging his tail.  The pick-up truck’s lights swung around the last curve and cut across the pump in the front yard before the truck came to a stop in the gravel.  Its engine was still running, and three men were crowded in the front seat.  As the driver opened his door, staticky country music and laughter came out with him.

“How are you doing?” the man said.  He was a tall, clean-shaven man in a black shirt and jeans.

“You can just get back in your truck and keep driving,” Ma said.

She lifted her rifle to her shoulder and aimed it at his boots.

The guy lifted both his hands and took a step backward.  “I was just looking for Howie.  Is he here?”

The guy scrambled back into his truck, swearing as he slammed the door.   The wheels spun streaks in the gravel as he reversed and then headed back down the driveway.  That was when the dog started barking, loud and fierce.  Ma reached down to pet his head.  When the sound of the truck was gone entirely, she came back in the kitchen door and turned on the overhead light.

I was still hunkered down by the window, afraid to move.  She braced the rifle across her knee and took the bullets out.  Then she gazed across at me.

“Where are your brothers?”

I pointed back towards the bedroom.

She gave me a little smile.  “You scared?”

“Would you have killed him?”

After that, I never knew when they’d come back, or if they would, but I knew Ma was ready.  She didn’t mess around, my mother.