The Mirror Girls: Gaia at Seven

The following is a bit story about characters from the world of Birthmarked.

As Gaia’s father and his customer, a bride, stepped out on the porch, Gaia climbed down the loft ladder to gaze at the creamy yellow dress on the tailor’s dummy, admiring the flow of the gauzy fabric and the tiny, delicate embroidery on the bodice.  She knew better than to touch it, but she leaned near enough to smell the trace of lavender that clung to it.

Through the sunny window, her father’s voice dropped into a laugh, and the bride chattered on in the music of happiness.  Gaia glanced past the dress to the darkness of the mirror, and caught a glimpse of the dress doubled there.  Slowly, she lifted her hand in arc, splaying her fingers, and watched the movement transformed into something graceful and foreign in the glass.  Like it belonged to a different girl.

She liked mirrors.  This one that her father kept for his customers was usually folded, draped with a dust cloth, and stored in the closet.  It consisted of two, full-length panels connected by hinges, so that the panels could be angled to permit different views.  The bride had recently turned before them, and Gaia tried the same motion now, peering over her shoulder at her own back in the reflection.

The narrow ribbon of her blue dress was tidily tied, and the backs of her sturdy legs were nicked with a few mosquito bites.  She tried pointing a bare toe to the side, touching it lightly to the wooden floor.  Then she moved nearer to the mirror, watching the world inside it expand with each step, even as she herself grew bigger.  There were three Gaias now, the one on her left, the one on her right, and the real one of her breathing in and out of her own nose.  She lifted a hand and the other girls did, too, and then, lightly, she began to pull the edge of the mirror closed on its hinge, decreasing the angle of the two panels of glass, so that the reflections multiplied. 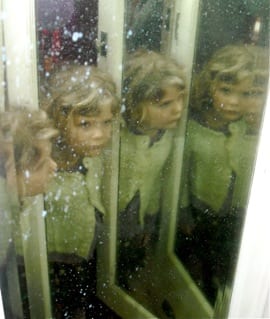 The world around and behind her shrank away to nothing, leaving only her own body in the world of the mirror, a circle of Gaias, half of them meeting her gaze, the other half always looking away.  She loved this world.  It was silent in there, and faintly green, and all the other girls obeyed her commands, only moving when she did.

She shifted to her right, lining up her nose along the edge of the mirror and watched as all the girls in the mirrors became double-scarred.  Then she shifted right, so that all the girls lost their scars and had smooth skin on both cheeks.  This is what you would look like, she told herself, without your accident.

“What are you doing?” her father asked.

She started and stepped back, looking up at him.

“I’m just looking in the mirror,” she said.

He was looking at her soberly, and she glanced past him toward the porch to see the bride was gone.

“Is something wrong?” she asked.  “I didn’t touch the dress.”

He gave a pained smile.  “No.  Nothing’s wrong.  What did you see in the mirror?”

She beckoned him nearer, and made him stand behind her and put his head above hers, so that when she pulled the edge of the mirror near again, they were in the mirror world together, their faces circling around on each other.

She felt his hand on his shoulder, warm and still and heavy.  She did the thing with her nose, turning her face to show him Gaia-with-two-scars and Gaia-with-no-scars.  “It’s like magic,” she said.

Her father slid out of the reflection.  She turned, uncertain, and found him sitting slowly in the chair before his sewing machine.  He was still smiling, but his eyes were sad, lonely.  She’d seen that expression before, most often when he was lighting the candles for her brothers before dinner.

“Don’t you want me to play with the mirror?” she asked.

She climbed up on his knees and he gave her a hug, the big kind that squeezed the breath half out of her.

He loosened his arms.  “You know you’re beautiful, don’t you?” he asked.

She still remembered the awful day at the Tvaltar when they’d gone for Emily’s birthday.  She’d never told her parents about that, but she wondered if Emily’s mother had said anything.  “No, I’m not.  Not like Emily or Sasha.  I have my scar.”

He fluffed her hair.  “True.  But you know where real beauty is?  It’s the kind you can’t see with your eyes.”

“That doesn’t make sense,” she said.

He touched his finger to her chest.  “It’s in here, where you’re nice and smart and happy.”

“I’d like some of the kind that shows,” Gaia said.

He laughed.  “I suppose that’s natural.  Does it help if I say you’re beautiful to me?  The prettiest girl in all of Wharfton?”

She tilted her face, regarding her father thoughtfully.  He was a good judge of most things, she’d found.  He certainly knew how to sew beautiful things.  She glanced back at the mirror to find the panel had swung open again and the glass was reflecting her and her father, in the chair, with the dark cabin behind them and sunlight streaming in the window onto the floor.

They looked happy together, there in the mirror, and she was glad she was in the real chair, in real life, not caught in the mirror circle with no voice.  Nice and smart and happy.  That’s how she felt.

“Yes,” she said, because it was true.

6 Responses to The Mirror Girls: Gaia at Seven