The law isn’t really called that, but since I’m already playing with fiction twists, changing the name is a satisfying place to start.  The Genetic Information Nondiscrimination Act of 2008 says about what you might expect it would: that insurance companies and employers can’t discriminate against anyone because of his or her genes.  They can’t demand genetic info about people, or their families, when they’re deciding whom not to cover in policies or whom to employ.  That’s the real law here in the U.S.

It’s just too tempting, isn’t it? 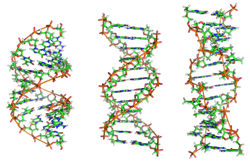 Imagine the reverse: that people have to register their DNA before they can work, vote, marry, or enter a hospital.  Imagine if, at the airport, while you’re taking off your shoes and exposing your personal effects to get through security, you also have to give a drop of blood so they can clear you in the genetic database.  Better still, suppose you have a child who is genetically desirable, and the government wants your kid to experiment on while they try to find a cure for hemophilia, or sickle cell anemia, or cancer.  Some wickedly awful fiction could happen.

I’m not personally worried about people knowing my genes.  Neither are the “PGP-10,” George Church and nine fellow scientists who released their personal genetic and medical data to the public as they launched the Personal Genome Project in 2008.  Over a thousand volunteers have now contributed their info to the project in the belief that doing so could  “promote human welfare through the advancement of scientific and medical discovery” (personalgenomes.org).  I wonder if it’s a coincidence that the PGP-10’s personal data went online just a few months after the Genetic Freedom Act was passed.

So, as I consider ideas for Book 3 in the Birthmarked trilogy, I can’t help noticing I’ll be playing on people’s fears about genetic discrimination, and possibly even adding to the misconceptions about how genes can be used for evil.  But I give myself permission anyway, because I don’t think it’s genetic information itself that is the danger: it’s uncontrolled, corrupt government that’s the danger.

And in real life, we’re safe from that.  So far.

2 Responses to The Genetic Freedom Act