Behind the Scenes: A Note on the French Translation

My daughter and I met Hélène Bury, the French translator of Birthmarked, in front of the Hôtel de Ville in Rennes at 10:00 Saturday morning and instantly bonded.  Hélène is funny, smiley, and genuinely nice, and what’s more, she and I have certain things in common that sealed our friendship: we both prefer hot chocolate to coffee and adore Colin Firth. 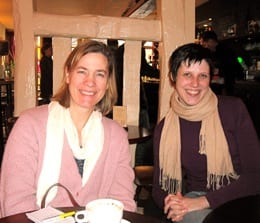 I’m particularly grateful that Hélène was chosen to translate my novel.  In the first place, she has lived in Texas, so her command of American English allows her to grasp the subtleties of connotations in the original text.  Consider, for instance, how “slender,” “thin” and “skinny” are all versions of the same concept but convey very different meanings.  “Finish” and “terminate,” are literally close, but one seems far more violent.  In a similar vein, when I have characters say something sarcastic, I choose words that will make that clear to an American reader without having to add a clumsy “he said sarcastically” in the tag.  I also pick certain words because of how they convey a character’s education or attitude, so the language in dialogue is especially important to me.  There are layers, too.  If Leon is described as “dreamy,” the word sounds sort of cute and dated, yet when a teen says it in a teasing way, it adds a quick sting of humor.

Hélène made thousands of word choices to accurately translate Gaia’s story into French, but there’s another factor I hadn’t considered.  She explained that sometimes one word in English would need three words in French to translate accurately, and it simply couldn’t be done with any artfulness, so something got lost.  Conversely, there were other places where a literal translation was possible, but there was a more graceful way to say the same thing in French.  In those cases, because she’d had to drop out a certain element in one place, she tried to add it back in where she could.  She knew what would sound smooth and polished in French, knowing that was what I valued in my English.

It’s very clear to me that my book was entirely in Hélène’s hands, and that translation is another form of writing, really–an art in itself.  In her effort to do the best job she could, Hélène asked her parents to read her translation to check for clarity or confusion, which is exactly the sort of thing I would do (Merci à vous, les parents!).  To my delight, she and her parents invented a verb “Gaïater” that means “to work on the translation of Gaia’s story” because that’s what Hélène was doing so intensely for so long.  (Bonjour, Hélène.  Qu’est-ce que tu fais ce soir?  Je Gaïate.)

Finally, there’s another reason why I’m glad Hélène was the one who translated Gaia’s story.  She gets Gaia.  For me to sense a kindred spirit in Hélène so quickly, I believe we share some of the same sort of vulnerability and strength, the outsider-ness and longing that underscore Gaia’s own character.  This translation wasn’t only an intellectual exercise, but a work from the heart, too, and that pleases me enormously.

I’d like to add that of course the translation also depended upon my wonderful French editor Sarah Millet for even more fine-tuning, just as it went through many versions of editing in the original American English.  Birth Marked Rebelle is really a book in its own right, another team effort.  I’ve been reading it while I’m here in France, skipping ahead to my favorite sections, and je dois dire, it makes me très heureuse.

Tagged: behind the scenes, birthmarked, writing

4 Responses to Behind the Scenes: A Note on the French Translation