Pyrho had never been outside the wall, nor wanted to go, but when one of the older kids at school told him he was advanced, this from a kid who had access to sensitive school files and tended to know such things with disturbing accuracy, he decided, before he talked to his father about it, that he had best go and see for himself what it was like outside the wall.  His father, still upset about Pyrho lighting the grass in the school playground on fire, would not, Pyrho decided, appreciate questions with implicit longing about his parentage.  Furthermore, his father would never let Pyrho go out on his own to explore, and exploring was now imperative. 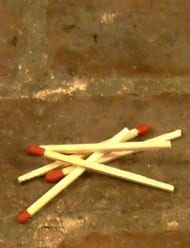 During recess, while the other kids of his year were playing on the swings and the jungle gym, and the big kids were playing soccer on the grass area that had not burned, Pyrho quietly passed back inside the building, down the dim, deserted hallway, and out the janitor’s door.

Bright sunlight fell on the cobblestones beneath him, and he instinctively tilted his hat forward to shield his eyes.  The walk down to the south gate was long, through streets active with pedestrian shoppers, but he’d had the forethought to put a piece of folded paper in his pocket, and this he held conspicuously now, under the guise he was simply delivering a note, as any boy might be called up on to do without remark.  With his other hand, he twitched the matches concealed in his pocket.  He couldn’t resist snagging them from home despite his father’s warning, and the spindly little sticks felt good, like luck.

The great doors of the south gate were open, and Pyrho slowed, watching the view of the unlake through the arched opening, and the nearing rooftops of Wharfton.  The bang of a blacksmith’s anvil rose from the town below, a sound familiar and beckoning.  The horizon drew him, and he knew once he stepped outside, no other wall would exist between him and all of the wasteland beyond the rugged homes of Wharfton.  A boy could walk through that gateway and keep on walking forever.

“Where are you headed?” asked the guard.

Pyrho peered up, seeing more Adam’s apple than anything else.  He held up the note.  “It’s a note for the Tvaltar,” he lied easily. The Tvaltar was the only building he knew of for certain, visible as it was from further up the hill.

“It’s likely closed now,” the guard said.  “Try the door around on the right.  That’s where the projectionist lives, if he’s not out in the market.  Don’t dawdle, now.”

He passed under the arch and strode down the long incline.  The wall looked taller from the outside, he noticed, and more impenetrable, but at least it would be impossible to lose his way when he was ready to return.  He slid the folded paper in his pocket with the matches.

The road dipped between the first wood and stone houses, and spidery alleys and trails fingered out in different directions, all bright with sunlight and sharp shadows.  Pyrho followed the sound of the anvil, and then voices, and when the quadrangle unfolded before him, alive with market day, he stepped under the shade of a mesquite tree to get his bearings.  It was a smaller market than the one he knew in the Square of the Bastion.  Here, people were more likely to have their wares spread out on a blanket than arranged on a cart or table, and there was an unhurried, relaxed atmosphere that engaged him.  Several boys ran past carrying long sticks and water jugs.

“Looking for someone?”  A young mother was paused just beyond the shade, a basket slung over her elbow, and he saw she was speaking to him.

A barefoot girl in a neat blue dress stood behind her, running her fingers rapidly through a circle of red yarn to tie it into an intricate pattern of spaces and lines, like a web or ladder.  She glanced up idly, and Pyrho was surprised to see her cheek was badly scarred.  The girl eyed him curiously.

“You from the Enclave?” asked the girl.

He was about to improvise about coming down to buy some eggs, but for once his words failed him.

“You just came down to take a look, didn’t you?” the mother said, in an easy, warm voice.  “That’s quite all right.  You’re not the first.”  She nodded toward a pair of old women on the far side of the quad.  “You might like to watch the spinners.  They’re fun.”

The woman smiled.  “Of course you have.”  She started to turn away.

“Would you like some matches?” he asked.  He scrambled in his pocket and thrust his hand forward, offering them.

The mother turned back again and considered him more closely, tucking her hair behind her ear.  She took a step nearer, into the shade.  “Thank you,” she said, and held out her own hand.

The boy turned his fingers over to pass the little jumble into her palm.

“Why do I get the feeling you won’t let me pay you?” she asked.

He shook his head.  It felt good, somehow, to give her something, and even better that she accepted.  He backed up a step.

“Heading back so soon?” the mother asked.

“Come again any time,” she said.

He peered around the market one more time, memorizing the sound of the smithy’s hammering, and the red of the string in the girl’s fingers, and the way the mother wrapped his matches in a tiny scrap of cloth before she tucked them in her basket, as if she’d been expecting them.  It was all right, he decided, if he was an advanced person, with a birth mother somewhere outside the wall.  He would ask his father about it when he got home.

15 Responses to Advanced Boy with Matches