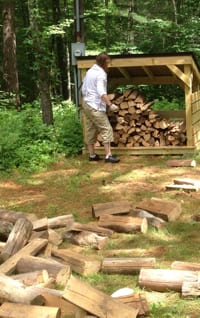 When I was last in Minnesota, my brother invited me to help with hauling wood logs to cut and split for the fireplace.  I was game.  Four of us set out together on the job, and at one point, while my older brother manned the chain saw and my younger brother levered out nails with my husband, it fell to me to take a turn splitting logs.

I was not a natural with an axe.  Secretly, I was concerned about chopping my foot off, but I was also certain I could learn to split a log.  It was a matter of trying, and of coordinating the head of the axe so it would fall deftly in the pale meat of the wood.  So I set a log upright on the ground, adjusted my gloves, hefted the axe, and gave it a go.

I missed.  Several times.  The head of the axe buried heavily in the grass and gouged the black earth.  I kept at it, adjusting my aim.  Each time I nicked it, the log fell over, and I set it up again. The top began to get dents and a few splinters.  Laying a second log flat to act as a base, I balanced my log upright upon it and took another whack.  My younger brother offered to do it for me.  I declined.  More advice was given.  I kept aiming the axe above the log and whacking downward.  Gradually, the wood became mangled and shredded, but the log remained unsplit.  I found, once my axe was wedged in the top, that it worked best to lift the log and the axe together to crack them down onto the base.  At last, fifteen minutes into my effort, the log split in two.

I am not deluding myself that I’m an expert at splitting logs.  In fact, after I was done, my older brother and my husband took over and handily split the rest of the logs with one swipe each.  I turned to stacking the pieces.  I had, however, unknowingly earned my younger brother’s admiration.  He told me he was surprised by the way I had kept at it and impressed by my determination.  He said, laughing, that I beat that log because I was a writer.

Until then, I hadn’t thought about how persistence in one single-minded task might be connected to long-term persistence, or that one type of persistence might be training for the other.  I am now hoping, however, that my triumph with the log is evidence that I’ll find my way with my writing.  I am entering the seventh draft of this novel, a layered riddle of a story that I’ve been working on for a year and a half.  My editor’s latest letter has pointed up a handful of significant problems that I have not managed to fix, despite my efforts, so I’m far from finished.

I wish I knew how to untangle my story problems, and I wish I knew that the outcome would be worth my toil.  But I don’t know.  I can only keep working and hope I’ll get there, with something to burn at the end.