Behind the Scenes: From Copyedits to First Pass Pages

After I finished going through the copyedits of Prized, I emailed the manuscript back to my editor Nancy Mercado at Roaring Brook in mid-December.  The next step was a series of emails we had in early January, when Nan checked back with me about a few of my changes and other things she’d noticed, like whether a character would be called by his first or last name in a particular line of dialogue.  Here’s another example, with my reply in italics:

Pg 153 “She might be too polite to say anything, but she was far from blind.” This isn’t part of Dinah’s dialogue, is it? Just checking. You just mean add this to the line, yes? Yes.  It is NOT dialogue, but just a comment on her thinking, and it goes on the same line as Gaia’s “indeed” line because it’s Gaia’s reaction.

All writing, revising, editing, and copyediting were finished, and at that point, Nan told me the book was heading off to layout—a significant milestone.  That was when the manuscript would be transformed from a Word document to pages that actually looked like a book.

Most of the design work didn’t involve me, understandably.  However, anytime I included an image, like hand-writing or a freckle pattern or a map, it was a design issue where my input was considered.  Like Birthmarked, Prized also has a code in it (why not, right?) and for the original manuscript, I drew the code, took photos of it, and dropped the photos in the document where I needed them.  They were basically place-holder images, but once designer April Ward was considering the look of the page, I rewrote the code again, took more photos, sent them in, and conferred with Nan about which images we actually needed.  By early February, Nan forwarded a file to me of how the thirteen pages with specific design issues would look.  They seemed gorgeous to me, frankly.  By the time April finished refining, even a certain shadow was perfectly aligned.  It’s the sort of thing that delights me, and  I am deeply grateful for April’s beautiful work. 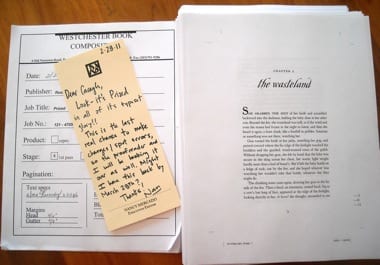 This week, Nan sent me the first pass pages for Prized, with each page laid out exactly as it will be printed in the final book.  Now is my chance to read through it one last time for any changes I can’t live without.  It’s like the dress rehearsal.  I have several weeks until the deadline, and I’ll need the time to read as carefully as I intend to, hopefully twice.

Though I’ve reread parts of Prized while I’ve been working on Book 3, sometimes to check a detail and sometimes because I just like being with friends in favorite scenes there, I haven’t read through the entire story since December, so I should have fresh eyes for the job.  I’ve never read the story on paper at all, and that makes it new for me, too.

And so you find me today at the dining room table, armed with a new pen, and I’ve started going through my first pass pages of Prized.  The first chapter looks clean to me, and I’ve made only a few tiny changes, so I’m optimistic this part of the process will go smoothly, especially since I’m eager to get back to revising Book 3.  Nan and a proofreader are going through these pages, too, and between the three of us, here’s hoping we catch anything monstrous.

Tagged: behind the scenes, prized, writing

7 Responses to Behind the Scenes: From Copyedits to First Pass Pages