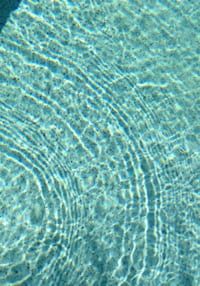 When you throw a stone in the water, the ripples spread outward in predictably widening circles.  When you throw a stone in a novel, it has ripple effects, too, especially if the stone kills somebody off.  This makes sense as long as I’m writing from the beginning to the end of a novel, in order, but sometimes when I’m revising, I add an event later in the book and realize I have to go back in, earlier, to set it up.  In such a case, I’m working from the ripples back to the stone.

It’s kind of fun.  I especially like working with ripples where plot and setting dovetail.  For fictional space to feel natural to me, my characters need to inhabit a location (like a tower or a basement) more than once.  It makes me feel grounded to return to a familiar place, and I like to play with patterns where the place is the same but the stakes keep rising.

A clear example of this happens in John Knowles’ A Separate Peace when Gene and Finny keep returning to a tree beside a river.  Gene is terrified and resentful that he must  climb the tree, step out along a high limb, and jump into the water, time after time.  The activity parallels his relationship with Finny and ultimately leads to disaster.

In my own latest novel, my characters keep circling back to certain key locations, and it’s interesting to me how first impressions of a place change as the risks there become more dangerous.  My characters aren’t repeating the same routine, as Gene did, but they engage with the locations by climbing them, or working there, or in one case, dropping pebbles down a pit.  It’s only a matter of time before someone gets hurt, and that will in turn cause more ripples.