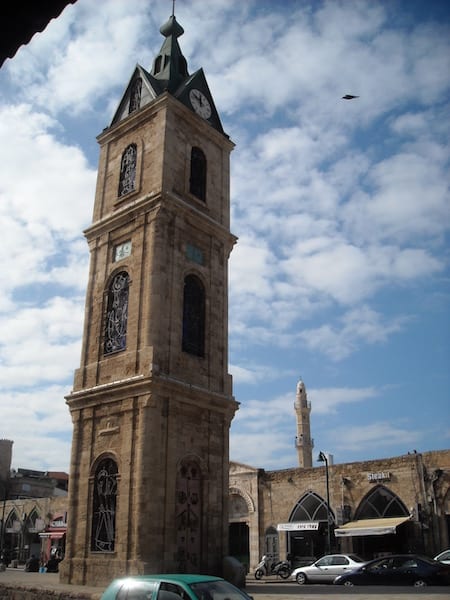 The Clock Tower in Jaffa, Isreal.

One of my favorite places in The Vault of Dreamers is the clock tower, an old, round, stone building in the middle of the Forge School campus. Stepping inside it with Rosie instantly takes me to another world. Naturally, I couldn’t help returning to the clock tower in The Rule of Mirrors. It can be powerful in a sequel to return to familiar places, especially if they evoke bad memories or bring back warm feelings.  For me, the clock tower does both.

Here is an excerpt from The Vault of Dreamers:

I went up a couple steps and ducked a low-hanging beam to enter a tall, narrow space. The mechanism for the clock, high above, was exposed to view. A column of narrow windows cast light through a series of chains that hung down from the clock to the level where we stood and downward, even lower. I stepped up to a railing and peered down a long, dim shaft. The chains kept going, dropping down to a depth out of sight.

“Cool, isn’t it?” Linus said. “The guy who designed the clock made it so it only has to be wound once every five years.”

Linus pointed to a cylindrical weight that was suspended some distance above our heads. “It runs on gravity, by weights and gears. Even the LED light at the top of the tower is powered by gravity. Otis explained it to me once.”

I could see a delicate, horizontal wheel spinning far above in the main mechanism, but everything else looked motionless.

“And what’s this?” I asked, looking over the railing again. Metal rungs were bolted to the inner wall and descended down like they were disappearing into a bottomless well. The clock chains had the smoothness of old, oiled metal, and I wondered if bugs or dust ever got caught in them.

“The pit is just for the weights,” he said. “It’s thirty feet deep.”

“I knew you’d like it.” Linus leaned sideways into the railing and passed me a pebble. “Go ahead.”

I weighed the little stone in my fingers, and then dropped it, listening while it vanished down through the silent blackness until it finally hit with a faint, distant clink.