Double Down or Recharge 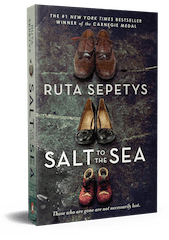 Whether you’re worried about your daughter-in-law who treats Covid-19 patients in a NYC hospital (like I am), trying to double as a home-school teacher while tele-working, or scrambling to find health insurance when you’re newly unemployed, you’re probably dealing with a lot more stress today than you were a month ago. Even people in fairly stable situations are more anxious and isolated than normal.

In such times, it’s tempting to turn to books for a different perspective. Here are suggestions in case you want to double down and immerse yourself into alternate scenarios of desperate survival. If, instead, you want to completely escape to recharge, a second list for that is below, too.

Life As We Knew It ~ Susan Beth Pfeffer
When the moon gets knocked off orbit by an asteroid, the U.S. electric grid, weather, and commerce are disrupted. A family survives on what’s in the pantry.

Dry ~Neal Shusterman
When a water shortage results in dry taps in California, people get desperate.

Salt to the Sea ~ Ruta Sepetys
In World War II, four teens try to escape danger from every direction and end up on the doomed Wilhelm Gustloff.

The Martian ~ Andy Weir
A stranded astronaut has to survive alone on Mars with basically only potatoes.

Rook ~ Sharon Cameron
No one suspects a certain proper miss to be the spy who is pivotal in a futuristic French Revolution.

Along for the Ride ~ Sarah Dessen
A lonely teen spends her summer by the sea with her deeply flawed father, his new wife and their baby.

This Is How It Always Is ~ Laurie Frankel
A family cherishes their gender-fluid child, making mistakes and loving boldly.

The Bookish Life of Nina Hill ~ Abbi Waxman
Who knew that finding family could be so complicated?

How To Marry a Marquis ~ Julia Quinn
A romantic frolic with absurdity and wit, typical of this author.

Attachments ~ Rainbow Rowell
An introverted IT guy falls for a worker whose emails he’s supposed to be surveilling.