Learning from That Writer I Knew 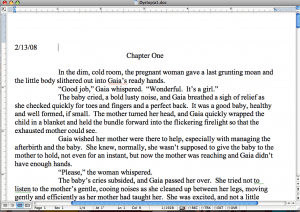 I went back to my very first draft of Birthmarked this morning to see how it opened, and I was surprised by how decisive and certain it sounded, especially since I know I was making it up at the time.  The draft was in single-space, which also surprised me because I write in double-space now, and this drew my eye to the size of the paragraphs, which were short, and the white space that flowed around them.  The prose already had a distinctive cadence that would remain through later revisions.  Altogether, I thought it was a pretty good opening, and I really wished I knew how I had pulled it off.

Then I scanned to the opening of my current novel, fearful that this one would be a total dud by comparison.  I shifted it into single-space so I could read it at a normal pace, and bam.  It works.  This one is a novel, too.  It’s different from Birthmarked.  The voice and the setting and the problems are different, but as a reader, I believe this book will take me somewhere I want to go.  As a writer, I’m reassured, even hopeful.

It’s tricky being a reader of your own work.  I’m intensely critical of my writing, and I sometimes fear I’m making mistakes by throwing out perfectly useful chunks of scenes that might have been salvaged with the right tweaks.  I do, rarely, put bits of deleted scenes back in, sometimes in new places, so I know to keep the cuts in an extra file.  But I also feel a certain click inside when I read a section that’s good.  I trust it. I want to put my hand in that storyteller’s grasp and go with her.  I forget that the book is mine.

I’m not the same writer I was five years ago when I wrote Birthmarked, but I can still learn from what I did then.  From a practical standpoint, I’ve already made a paragraph shift in my first page to adjust the visual pace.  More fundamentally, I can remember to trust myself.  I wrote that book and two more in the series.  I ought to be able to do it again.