Get your earbuds ready.  The audio book of Birthmarked has arrived! 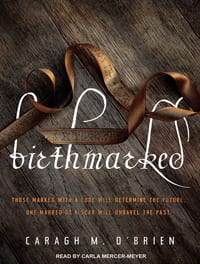 I’m so happy about this project. Over the last few months, the audio book process for Birthmarked has been charmed, but it was not always so.

Let me take you back.  About a year ago, I received a nice email from Carla Mercer-Meyer, who said she would love to narrate the audio book for Birthmarked, and she offered to send me an audio sample.  I was sorry to report back that we had no deal for an audio book.  Honestly, I didn’t know that we ever would have one.  Not all novels are automatically converted into audio books, and it was never a given that Gaia’s story would make the jump.

The audio rights had sold to Roaring Brook as part of the original book deal back in 2008, and as I understand it, my publisher had shopped them around without finding any takers.  After Carla’s email, I asked my agent Kirby Kim about having the audio rights revert back to me, and when he looked into it, Roaring Brook agreed.  Eventually, Margaret Riley, who handles audio rights at WME, began seeking an audio publisher for me, and Tantor Audio, a company here in Connecticut, made us an offer for all three books in the series.  I received the good news late one night while I was on tour, via email in my hotel room, and I was thrilled.

You have to understand: I love audio books.  My family has a history of listening to them on road trips when we all shared the stories together, and for years, my kids had their cassette players and cd players running audio books almost daily, so that the voices drifted through the whole house.  I love how audio books bring the words alive around me and effortlessly fill my head with story.  Now Gaia’s story would be joining this world!

I knew nothing about how audio book companies find their narrators, and I’d never heard Carla’s audio sample so I didn’t know the quality of her voice, but I remembered her enthusiasm, so I asked my agent to pass Carla’s name along to Tantor for consideration, and shortly after, they hired her to narrate the series. 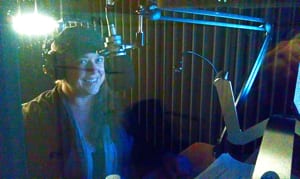 Then the fun began.  Carla Mercer-Meyer (not to be confused with Carla Meyer, the dialect coach) is incredibly precise and careful about her narrating work.  In prep for recording, she sent me lists of words she wanted to clear with me, like “Tvaltar,” “Mabrother,” “Mx.” and “Sylum,” sometimes with audio files attached.  One night, we had a great phone conversation, and I had the strangest, nicest feeling.  Carla’s voice has exactly the warmth and honesty that I’ve always imagined for Gaia, but until then, I’d heard her voice only in my mind.  That night, I knew I was talking to a grown up in another time zone, but it felt like I was talking to Gaia, like she truly existed and could talk back and laugh with me.

Starting December 3rd, 2012, Carla spent ten days recording all three books in the series at Mosaic Audio in Los Angeles, California.  She and the sound engineer, Alex Kostel, worked very closely together, and as Carla says, “We actually did it in a phenomenal amount of time.  I think part of that was due to the fact that Alex didn’t want me to stop reading.  The first night, he forgot to tell me it was lunchtime, so we worked straight through and when we did take a lunch in the following days, it was only for about 20 minutes.  Slave driver, I tell ya!”

The result is awesome.  I listened to a sample of the audio this morning, and it is so cool for me to hear how Carla’s inflections and timing bring the scene to life.  I always hoped, if the books were recorded for audio, that they’d have their own special vibrancy.  Now they do.  I was incredibly touched when Carla told me, “for ten days I WAS GAIA, and that’s when I know a book is really something, when I actually become the main character while I read.”  I could not ask for a more perfect narrator.

The audio book of Birthmarked is available through Tantor, Amazon, Barnes & Noble, and Audible.com in CD and downloadable formats.  Prized and Promised will be released later this month.  Tantor is also running a giveaway of the audio book on Goodreads until January 31st.  Happy listening!