The Setting Can Match the Action, or Not 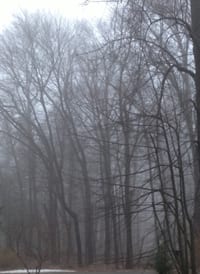 All it takes is a foggy, unexpectedly warm morning in January to transform the world into something magical and full of mystery.  We’re intensely sensitive to real-life settings and the moods they create, so it makes sense to use them carefully in our fiction writing, too.

Consider how a setting can support or contrast with the action of its scene.  If a character learns on a Ferris Wheel that his girlfriend loves him, the setting piles happiness on happiness.  If he finds out she cheated on him, the contrast of the bright, lively setting to his own betrayal compounds his isolation and rage.  The relationship between setting and the character’s emotion can be nuanced and complex, like when we put a widow character in a dealership to purchase a new car after her husband has been killed in a crash that also destroyed their car.  The survivor needs wheels, practically, to get around, but it might be her first major purchase without her spouse.  The work of the private problems in the public setting can set up sensitive possibilities: despair, confidence, fear around finances, moving forward literally with life, and more.

I’m working now with a flashback where the setting supports a complicated family scene.  My novel takes place in the future, in a world that doesn’t yet exist, so part of the challenge is picking details that will make this inherently foreign place feel familiar to my reader.  I’ve supplied my scene with a red curtain, antlers, a disassembled gun, a broken TV, a sagging couch, cookie batter, and a dripping skylight, all of which serve to make the place feel real.  Choosing the right things comes with living in the scene with the character, and then it helps to sprinkle the details in with the action and dialogue, so they don’t hit the reader as a pace-killing block of description.

In the end, what matters is the sum total effect of the setting details: how they influence the character’s emotions, and vicariously, the reader. It’s a perfect challenge for a gray morning.