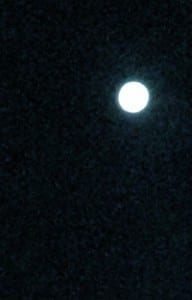 Her brain is fried, and she’s been sitting in the same chair for hours and hours.  The house is quiet, it’s late, and the responsible adult in her tells her she ought to quit writing and go to bed.  But she doesn’t.  She hangs on, rereading sentences, pondering words, taking a long time to make small decisions and knowing as she labors that she’ll unravel the decisions in the morning at a stroke.  In time, she starts to type with her eyes closed, so she can see the scene better, but she needs her eyes open enough to see the letters on the screen, so she squints and slow-blinks at them, like someone in a trance.

It’ll be just as bad once she puts the computer aside and shuffles to bed, because though the novel will be left behind sulking, a pad of paper will be within reach, and she’ll keep the light on, muddling over titles, as if the brilliant idea that has eluded her for months will hit her just as she’s letting go.

Then, even if she can reach the light switch and release the pen, she’ll be too tired to go to sleep.  The novel will bumble around in her dumb brain for hours, deep into the night, never satisfying her and never letting her go.

She tried to set a rule for herself, back in the daylight, when she was still in charge.  No writing after 9 o’clock pm.  She thought a reasonable limit would give her a chance to disengage before she went to bed.  But she breaks her rule all the time.

What is this obsession?  Why does she feel this urgency to keeping pushing and pushing at the same recalcitrant novel?  Why is she sucked in so many nights to the slippery, childish side of her that can’t let go? A new star, ages away, rolls in the black universe and sends its velvet light her way.  This gift she senses only after the tipping point.