A new world is expanding in my head on four different levels. I should know this feeling by now, but I still find it very odd because I don’t really understand how it works.  You know those freeze-frame sequences of a flower blooming, each petal opening in bright, impossible color before your eyes?  First-drafting this new novel feels like that, except I’m in an entire garden of those flowers and I’m blind-folded, finding them by touch.

First, it’s happening in a particular scene, when the voice of the main character is coming alive to me in the way she experiences the room where she is, with the night rain on the skylight just before she climbs through.

As one scene leads to the next, I’m going with her, discovering the community where she lives, with its physical layout and purpose, its friends and enemies.

Beyond that, for the third layer, is the larger world with its weather, political system, wealth, boxcars, century, and connectedness. I don’t even know where my character is on the planet yet, except that she must be closer to the equator than where I live, because of the light.

The fourth level involves layers of time, as my character develops memories of her family and how she came to be where she is. An elusive story is gradually, organically emerging from her and what she does.

Where the novel will actually begin I don’t yet know, because all of these early scenes could end up cut. Shaping the novel will come later, but this is where I begin to know it. It’s so different from the revising I’ve been doing that it hardly feels connected to the same job. 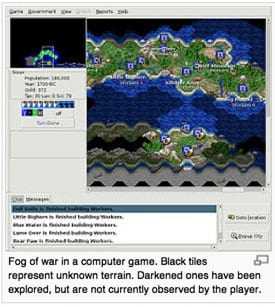 From Wikipedia: Fog of War

I’m reminded of the computer games I watch over my son’s shoulder, where his avatar marches over a new horizon or into new tiles that come to life only once he’s there, turning green or gray, with battles ready to unfold. The rest of his untraveled screen is black, in the “fog of war.” The difference is, he’s discovering a terrain that the designers created. It exists already, waiting for him.

Nobody knows my new terrain yet, least of all me.

I know people exist who say there are only so many finite plots, and every new story is a permutation of one of those standards, or a combination of them.  By the end, by the time my novel is polished, I won’t object if someone says it is this or that, (journey, romance, forbidden love, revenge, Cinderella, initiation, whatever).  But I’ll tell you that those standards have nothing to do with my own first-drafting.  I don’t start with a template. I go. I discover. It feels both dumb and incredibly powerful.

At least I’ll be surprised.  Wish me luck.

7 Responses to Enter the Garden