Behind the Scenes: Copyedits

I received my copyedits for Prized two weeks ago, along with marginalia from my editor.

We work with the Track Changes feature of Word at this point, and when I first received the manuscript, I shrank down the pages to get a general idea of how many comments I’d be dealing with (see Photo A).  The purple comments from Jill Freshney, the managing editor, have to do with formatting, so I largely ignore those. The green ones are from Suzette Costello, the copyeditor who, incidentally, also did the copyediting for Birthmarked and remembers things like Gaia’s customary gesture with her hair and points out where she’d be likely to do it again.  Amazing.  Suzette catches things like when I turn a cloak into a shawl, put a space in “anymore,” mix up the names of players on my teams, or say “boys turn into girls” when I really mean “girls turn into boys.”  She’s a mind reader with a very precise eye.  Her suggestions take little soul searching for me, and I almost always accept them. 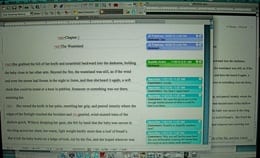 B. Notes Up Close

The aqua comments are from Nan Mercado, my editor, and these are substantive. Though Nan and I have been discussing drafts of the novel since March, this is the first chance we’ve had for line-by-line feedback, and reading her notes in the margins is like having an extra voice along in my mind while I’m writing, a friend who pauses to call attention when anything could be clearer. She might say, “This line seems slightly out of character for the narration, no? It’s a direct statement about how Gaia is, instead of her state of mind at the moment,” or “I like how this will be echoed later in the scene with cadaver, but I’m not sure I believe that she would examine a corpse in this moment. She was so weak, why would that occur to her?” They tend to be open-ended questions that I could solve in any number of ways, and there are very few I disregard. Even then, I consider carefully before I make no change.

As I go, I keep in mind the broader comments Nan included in her accompanying letter, with feedback from her intern, too. Stacy Herman hasn’t read Birthmarked, so her fresh perspective helps me think about what might be missing for readers who come to Prized having no familiarity with the back-story.  Explaining old business requires a delicate balance because I dread boring returning readers with repetition, but I don’t want new readers lost.

The last thing I consider is another draft of my own that I kept revising while the book was ostensibly out of my hands. You can see it in the background of the screen (see Photo B). That tinkering gets merged into this draft, too, and I need to make sure it is scrupulously clean because the book is now post-copyedits. How awful it would be to throw in extra errors at this point. 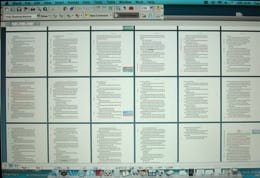 C. After Folding in Copyedits, etc.

Here’s what the manuscript looks like once I’ve made my changes (see Photo C).  You maybe can’t see it, but the red indicates new changes in the text, and I deleted the comments from the margins as I went, leaving only a few that I’m still pondering.  I have about sixty pages left to go, so I’ll be done in a couple days, but I’d like to take one more chance to read through the whole thing at normal speed, just to make sure it all works.

In case you can’t tell: I love this part of the process.  I could not do it without Jill, Suzette, Nan and Stacy.  Never think my novel is the work of one person.

Tagged: behind the scenes, prized, writing

12 Responses to Behind the Scenes: Copyedits