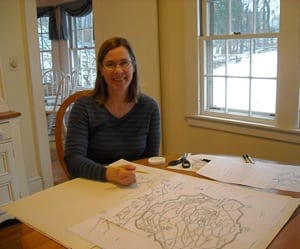 I put the final touches on the map for Promised last week.  It’s funny, because on paper it doesn’t look like I did much, but the thought process and the designing were actually rather involved.  I began with the original, oversized map from Birthmarked and took a trip down to Staples to make 11×18” copies of it in pieces to tape together.  The taping part reminded me of grade school, when I first delighted in matching up edges so lines across ripped pages looked continuous, healed.

Then I went to the attic to find the big paper I knew was up there somewhere, a process that involved culling out a couple old games and rearranging a bookshelf while I was up there.  Naturally, I had to face my mortality through my dread of properly cleaning my attic before I die (decades from now) so that my children won’t be saddled with my nonsense and secrets.  Attics are never simple.

At last, seated at the dining room table with freshly sharpened pencils, I realized I’d been thinking about this map for months.  I had already envisioned the terrain where Gaia walked, and where a refugee community would pitch its tents.  As I began drawing, snaking off a path line of the original Birthmarked map, I realized I was doing something Gaia could do if she drew a map from memory, for planning purposes.  I could feel the double-shadow of her fictional hand clasping the same pencil I did.

The paths expanded and wove together.  I named locations, added labels, and made a note to myself to include a change to Promised when it comes back to me in first pass pages.  I slept on my ideas, took another look at my draft, and revised.  I made mistakes, used a white-out pen, and when my lines became too garbled, I substituted in another one of the 11×18” copies I’d made and started a section over.

The final map, as I’ve said, might not look like I changed much from the one in Birthmarked.  Yet this map is exactly what is needed for Promised, no more and no less.  I’ve sent it off to Macmillan, and now it’s up to Anne Diebel, the art director, to find a way to put my pencil scratches into the book.

5 Responses to The Last Map