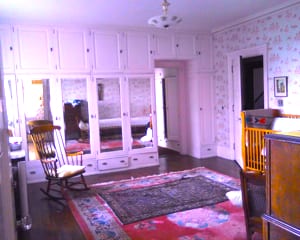 One closet was devoted to dress-up clothes, and as it was positioned over our laundry basket, the dress up and dirty clothes often mixed and had a similar scent of wood and sweat.  A favorite, satiny dress we wore through until it was threadbare, and kept wearing with various sashes and pointy-toed high heels.

My father owned a toy store and believed in play, from forts to kits of the Dickey House.  Mess was assumed and tolerated to explosive proportions, until a parental crackdown would command a complete pick-up.  Then we’d stuff our gear into already full closets, vacuum the floor, and let the mess start to creep again.

My sister and I shared the room in matching twin beds, and at night the light from my brothers’ lamp a room away would shine toward our beds so if we raised our hands or legs, we could make shadows on the wall.  My shadows were bigger and fuzzier than my sister’s, which lent themselves to domination, while hers were distinct and birdlike, good for shadow puppeting.

When at last we settled down to sleep, and my brothers turned their light off, too, the windows would take over the dark room.  From the city lights below and light reflecting down from the overcast sky, the windows glowed faintly purple.  The heat would blow gently in.  I’d look out at the tree branches and listen past the crickets for police sirens, or the train whistle from along the tracks passing by the river.  I’d think about the people out there, still awake and going places, while I was snug and safe at home.  I wouldn’t want the day to be over.

My girlhood bedroom had pink ballerina wallpaper, six mirrors, and two windows overlooking the Mississippi River Valley.  It still does.  My mother has recently sold the house and a new family will be moving in soon.  I hope they hang fresh wallpaper, fill the closets with toys, and let the messes run free.  I hope they listen for the train whistle.

2 Responses to The Pink Bedroom