Beast and the Beauty

No one prepared me for the day strangers would be unfriendly to me, and it happened when I most needed a smile.  I was a young mom, haggard, sleep-deprived, and hauling my newborn in an awkward child-seat-carrier that looked like a piece of space-age armor.  It happened in some innocuous, anonymous setting like a bank or a grocery store, when I needed to make some uneventful transaction.  The person behind the counter was not especially rude—I’d certainly encountered bluntly rude people before and I knew what that was—but this person treated me as if I were a big, boring inconvenience, and I couldn’t at first understand why.

Then it hit me: I was ugly. 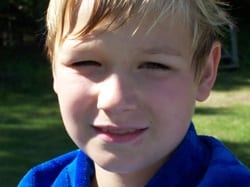 It was a huge and humbling discovery for me that I deserved no special welcome, no receptive, interested smile just because I was me. Even as I write this, I know it sounds appallingly egotistical that I felt so entitled in the first place, but there’s a point behind my implied bragging.  I lived in California at the time, and when I had been pregnant, the world opened for me: strangers held doors for me, people put me ahead of them in line, old women came up to me in produce sections to put their hands on my belly.  Okay, that was going a bit far, but still, I was excited for my first child, and I believe it showed in my pink-cheeked, sunny attitude anywhere I went.

When I was a beautiful Madonna, I was treated with gracious kindness and indulgence.  When I was an ugly mom, I was treated with indifference and annoyance.  I learned that in order to get the smiling helpfulness I craved from strangers, I had to work for it by being really friendly and smiley myself.  It helped that soon my infant was a very cute toddler, deserving of kindly attention himself, but I never forgot, and as I looked around me more closely, I realized my lesson went far beyond motherhood issues.  I’d hit upon a permanent change for the rest of my life: I needed to exert myself, evermore, because I was no longer young and beautiful.

This may be so obvious to everyone else that no one ever bothered teaching it to me, but what I’ve learned is that pretty, young people get treated better than anyone else, just because they’re pretty and young.  If they happen to be polite, as well, then everything is stacked in their favor from the moment they walk in any door.  They become so accustomed to it, they don’t even realize they’re getting special treatment. Conversely, ugly people of any age are likely to get treated like garbage, and if they happen to look sullen, that reception will be repeated daily.

It’s absurdly superficial, but look around you.  It’s true.  It’s demoralizing, especially when you consider what cycles are perpetuated.  Picture that scruffy-haired teenager smoking alone outside of Store 24.  Yet there’s hope, too, because people really do respond to overtures of friendliness, even from us older, uglier types.

I’ve decided there are two things we can do about the problem: raise our children to be polite, and smile more at strangers, especially the ones who look like they’re having a bad day.

5 Responses to Beast and the Beauty