The Missing, the Lost, and the Stolen

Now and then, when I’m taking a quick break from writing, I go to WorldCat.org, the free website that catalogues books in libraries worldwide, to see if anybody’s reading my book.  Birthmarked is listed in 720 libraries.  That seems like a lot to me.  For a frame of reference, Harry Potter I (1998) is in 5,021 libraries, and Printz-winning Paolo Bacigalupi’s Ship Breaker (2010) is in 1625. 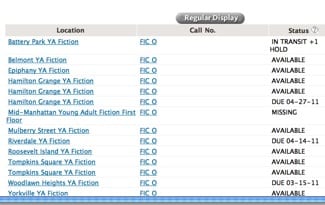 One amusing thing about the site is that it organizes the libraries by distance from my own zip code, so the system farthest away that carries my book is, at 10,400 miles, the Sutherland Shire Libraries in Australia.  I get a kick out of that.

For no particularly logical reason, I’ve picked one library system to be my litmus test of whether anyone’s reading my book, and that’s the New York Public Library, which lists fourteen copies in eleven different locations, from Battery Park YA Fiction to Yorkville YA Fiction.  If even one copy of Birthmarked is checked out, I feel like I’ve scored.  Sometimes it’s as many as six. 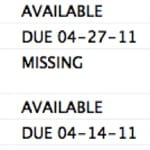 This weekend, I found something new when I checked the site.  A copy has gone missing.  MISSING!  Maybe it’s just sincerely lost, but maybe MISSING is a euphemism for STOLEN!  I’m imagining some reader liked Gaia’s story so much she stole it, hiding the hardcover furtively under her black jacket as she slunk out of the library and down the marble steps into the rain.

It’s sort of a compliment, but only sort of.  The problem is, now that my book is stolen, nobody else gets to read it.  The poor frazzled librarians with their dismal budgets can’t replace it, so the book will remain listed forever as missing, or maybe the entry will end up deleted.   In the meantime, once read, the book will molder under the thief’s bed, with cookie crumbs and other stolen books, sadly wishing it were back on its old shelf beside Day of the Assassins by O’Brien, Johnny  (unless that’s gone missing, too). 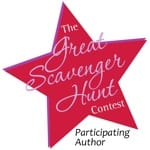 My friend Kay Cassidy, who runs the Great Scavenger Hunt Contest™ for over 700 libraries nationwide, recently advised me not to sign the copy of Birthmarked I sent along for one of the prize packs that she awards to librarians.  Kay said that signed copies are more likely to walk.  In short, making a book special defeats the purpose of donating it.  Sad, right?

Now I’m imagining the scope of hundreds of books all stolen away.  The police blotter from Shaker Heights, OH recently posted that $12,000 worth of books were stolen over a seven-year period from two libraries there.  We can start multiplying.

It’s too awful to bear, frankly.  So instead, I’m hoping MISSING really just means “momentarily misplaced,” like what happens with my keys upon occasion, and the book will show up soon, abashed perhaps for having let itself fall down a crack behind some other book for a day or two.  I’m picturing it getting a little dusting off and a quick shove back into place, ready for the next hungry patron.

Sometimes optimism is all we have.  Optimism and libraries.

6 Responses to The Missing, the Lost, and the Stolen