The Ghost of Mary We-Ha-Kee

I respectfully contribute this story to Camp Eve for Eve’s Fan Garden, in honor of CIT’s and ghosts everywhere. 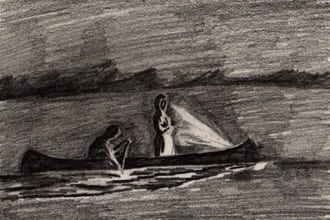 Our camp was haunted.  One of my jobs as a CIT at Camp We-Ha-Kee was to make sure the ghost appeared once during each camp session, preferably on a bloody moon.  Sometimes, the ghost of Mary We-Ha-Kee walked the forest at night, singing a lonesome tune.  Other times, she rode her black and white pinto between the campers’ cabins, leaving ghost tracks for them to find in the morning.  And one night, I paddled the ghost’s canoe silently across Hunter Lake while awed campers watched in their pj’s from the shore.

Our ghost was Sami, a wise-cracking, wiry teen who complained a lot and loudly about her job washing dishes in the camp kitchen.

“You’re not getting me in that canoe,” she said.

I pleaded and begged.  “You don’t have to do anything.  You just have to stand there.”

I didn’t have any money.  CIT’s worked for room, board, and the glory of gaining experience.  Our camp director no doubt coughed up some ghost fee, and on the given night, Sami appeared on the dock carrying a blanket to put around her shoulders: her Sioux costume.

We launched.  I don’t know if you’ve paddled a canoe at night lately, but it’s not the easiest thing to do.  You can’t see, for one thing, and you can’t expect the campers to see anything either.  We came up with the clever scheme of shining a flashlight on Sami, which had the added bonus of attracting mosquitoes, both to Sami and to Mudge, the other CIT who lay hidden in the bow of the canoe, aiming the flashlight at Sami.

Sami was standing in the center of the canoe, a plus for romantic visibility but an absolute no-no as far as stability goes.  Authenticity didn’t occur to us.  After all, we already had a flashlight shining on a ghost.  I was sterning from the back, trying to keep our canoe near enough to the shore that the campers could see us but not so near that they could identify us and hear us swearing.  The black water gurgled as I dipped my paddle deep enough to wet my fingers.  Basically, I was steering by feel.  Badly.

As if we could change positions in the middle of the lake.

I’d like to say that Sami, Mudge and I bonded that night, but the best I can say is we survived paddling around the point, out of view of the last camper cabins, to where we let Sami sit down.  We turned off the flashlight.  We slapped and scratched our new bites.  We cursed the ghost of Mary We-Ha-Kee.  Mudge took up her paddle in the bow, and with the dim light at the dock to guide our return, we canoed swiftly back around the lake to shore.

3 Responses to The Ghost of Mary We-Ha-Kee