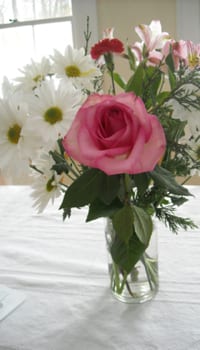 Someone asked me recently how far my characters would go.  It made me laugh.  Gaia’s sixteen, and there are two more books in the trilogy, so theoretically, where she could go romantically and physically is pretty wide open.  I was thinking of ninth graders when I first wrote Birthmarked, so I was surprised when it was published for age group 12+ because I knew that meant that avid ten-year-old readers would find their way to my book, and they have.  Then again, I’ve heard from quite a few grandmas and grandpas who have liked the book, too, so while I feel a responsibility not to make kids squirm, I certainly have readers who can read between the sheets.

I’ve written romances.  I know what that takes, and my YA novels are not romances.  In a traditional romance, the relationship, with its growth and tension and conflicts, drives the plot.  The boy had better show up early and often, and he had better be the focus of the heroine’s thoughts, even if she’s resisting thinking about him.  I can’t tell you how wonderful it is for me to be writing books where my protagonist is concerned with other very real problems.  It makes it all the more delicious when some cute, brooding boy shows up to get slammed by the real plot, too.  When a relationship has political consequences and brings disaster, I am beyond happy.

So, what do I do with the actual scenes?  How far does the romance actually go?  I’ll tell you one thing.  A romantic scene had better feel as real as the rest of the book.  Since it’s a time of peak emotion, I have to be especially careful not to gush, or use clichés, or explain too much, or have someone say something that doesn’t match his or her character.  But I can’t skimp, either.  It has to be long enough and in real time, so that the reader can live it along with Gaia.  It had better be good.

I’ve been working on three pages of Prized.  This is my twelfth draft, but this particular scene I’ve revised between twenty and thirty times.  We’re past copyedits now, so I’m only going to get one last chance to put in changes and they can only be minute.  That’s all right, because most of it is fine, but I’m looking at two lines of dialogue, and they’re just wrong.  The boy says something that has the right disappointment, the right humor, the right longing, but the words themselves would be better from someone who’s thirty and he’s a teenager.  Reading quickly, you probably wouldn’t even notice, but it bugs me.  I’ve been trying for days to figure out what he’d say instead, and I’ve come up with a dozen other lines that are wrong, too.

It can’t sound too studied.  It can’t be too blunt.  It has to be in his voice.  My characters aren’t the types to say “I love you” to each other.  They don’t seal anything with a kiss.  I finally backed into the scene again with a more specific sensory detail, so I could really see myself there, really hear what they were thinking, and at last he said the right thing for me to write down.  I’m very happy with him, and so is our girl Gaia.  At least in that scene.

Sigh.  It kind of makes me wonder if it would be fun to write a YA romance, straight up and for real.

13 Responses to Tackling the Romance