A. Now and then I wonder that myself.  I can always call up my editor and ask, but the sales numbers don’t mean much to me since I have nothing to compare them to, so I end up calling my agent for an interpretation.  He tells me not to worry, the numbers are “strong,” and since I trust his expertise, I find this reassuring. Even so, I suspect I’m not alone in wishing I had a better ball-park understanding of what goes on with young adult debuts, so I dug around for some basic data. 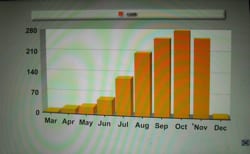 A. Bestseller YA Debut (NovelRank)

We all know statistics can be misleading, especially when you have a small sampling of a large unknown pool, but why let that stop us?  How a novel sells on Amazon.com is, I’ve heard, anywhere from 5-20% of the novel’s total sales, so that information on its own is not very useful.  NovelRank.com, a free, public site, takes the frequently updated “Amazon Bestsellers Rank” data from Amazon.com and charts it in long-term graphs.  Now it starts getting kind of fun.

Here’s a graph (A) of a debut young adult novel that was a bestseller the first week it was released, at the end of August.  It’s been selling well over 200 copies a month on Amazon for the last four months, and it pre-sold a lot before it was even released.  Don’t be deceived about the December drop-off: we’re only two days into the month. 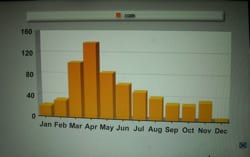 B. More Typical YA Debut? (NovelRank)

Then there’s a graph (B) of a different debut young adult novel that came out in March, like mine.  It sold well over 100 copies on Amazon at its peak and is still selling, but closer to 30 per month.  I’ve seen half a dozen similar graphs for debut YA novels—a tiny sampling—just enough for me to not get bored and to guess this is a more typical curve.  Please remember, I’m totally not an expert on this.

Finally, here’s a graph (C) for Birthmarked, also a debut young adult novel, which was released the last day in March.  NovelRank started following it April 2, when I first discovered the site and entered the title for tracking.  Its highest bump shows just over 100 books sold on Amazon in May.  It had a drop in August, picked up again in September when school started, and has been fairly steady in the 70’s since. 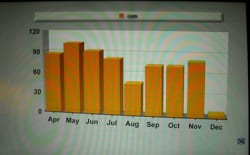 I already knew my book was no bestseller, but it also looks like it’s doing as well or better than debuts usually do, at least on Amazon.  I think it’s early yet to know how it might do long term, but “strong” for now seems pretty good to me.

By now you’re probably wondering why I don’t just consult my royalty statement. I will, when I get one.  Then I’ll probably have to dig up some basics so I’ll have something to compare it to.

As always, feel free to comment.  I’m sure there are people out there who know more about this than I do.