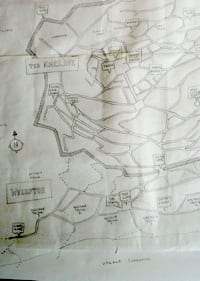 Map of Wharfton and the Enclave

A summer ago, in Minnesota, I sat in my Aunt Rosemary’s lodge overlooking Island Lake and prepared to draw the map of Wharfton and the Enclave.  My son Michael and niece Maura offered to help.  I had the places all in my head, visually, but it was harder to set them down than I expected.  Logistics intruded.  It was important, for instance, that Gaia would be unlikely to stumble upon Mace’s bakery on her first trip to the prison, but the chimney of said bakery needed to be visible from a prison window.

We started with one piece of paper, and I sketched in Gaia’s home, the southern perimeter of the wall, and the Square of the Bastion.  As I tried to estimate the size of the Enclave and include the complete circumference of the wall, we had to add another sheet of paper, taping it on to the north.  As I expanded Wharfton, we added a third piece of paper on the south.  We penciled in squares for key locations: Ernie’s Café (named for Hemingway in honor of “A Clean Well-Lighted Place”), the Quirk Home (named for a teacher friend), the Corpse Shed, the Nursery and the Honey Farm (originally a graveyard).

It started getting more complicated. Ernie’s Café needed to be on a convergence of corners far enough from the Square of the Bastion that walking there could take a while and stopping by Mace’s Bakery spontaneously would make sense.  For safety reasons, certain people could not pass the Bastion on their way between the Nursery and the Quirk Home. I paced carefully through each walk in the story, including one in an underground tunnel, making sure I had a consistent layout of sites.

I also had class distinctions to think of, even within the wall.  The city was built on a hill, and the wealthier people lived in the higher neighborhoods, so there I made the roads farther apart and added Summit Park, a place where Leon could have played soccer as a kid.  I put more tightly spaced roads and long, narrow blocks in the steeper, lower parts of the city near the Corpse Shed, the Solar Grid Plant, and the Mycoprotein Plant.

Outside the wall, I needed the sectors laid out so that Gaia’s home in Western Sector Three would be at the edge of the unlake and far from the South Gate.  I found a logical place for the Tvaltar on the Quad, and added Derek’s Bakery and Emily’s Home.  I knew there wouldn’t be many roads outside the wall, so I indicated paths with dashed lines, starting with the ones going to the wall where water spigots would be located. 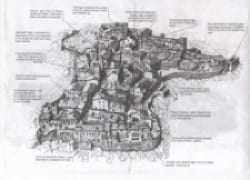 Finally, I reshaped the wall, drawing on my memories of walled cities in Italy like Certaldo and Ferrara, where the walls are far from perfectly circular.  I added labels and the compass face, and darkened all the lines with black ink.  In all, it took me several weeks of persistent tweaking, and I finished back home in Connecticut, August 18th, 2009.

I wasn’t certain the map would make it in the final book.  It wasn’t in the ARC, and I knew we were so short on available blank pages (books are bound in multiples of sixteen pages, so we’d bumped a limit) that we had already decided to cut the Author’s Note page, instead putting a notice about Global Greengrants on the copyright page.  Nan Mercado, my editor, suggested we could put the map behind the Contents page, facing page one of the text.  I mailed the original copy of the map, all three sheets of it taped together, down to Ann Diebel, the art director, who cleaned up the labels and made it all legible.

That’s how the map appeared in Birthmarked.

Last week, I asked Nan when she needs the map for Prized, and the answer was “Soon.”  I’d better get going.

(1/25/12) I’ve had several requests from people with e-readers for online versions of the maps in Birthmarked and Prized, and it seems the best I can manage is to scan the maps from the books to post here. If you click on the images, they enlarge, and I hope that helps. 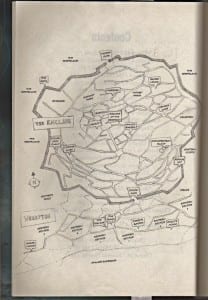 Birthmarked Map: The Enclave and Wharfton 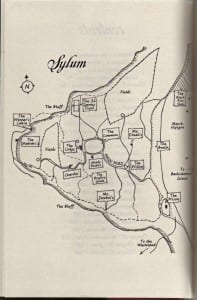