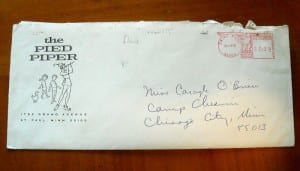 A Letter from Dad

When I was a kid, my family routinely played with codes.  My dad had been a cryptanalyst in the U.S. Army, and when I was at summer camp, he often wrote letters to me in code, with a key along one edge so I could decipher his message, letter by letter.  During the summer, when my family spent weeks in the northern woods of Minnesota in a log cabin with minimal plumbing and no TV, any rainy day could find us kids writing secret messages to each other and deciphering them, belly down on the red rug before the fire.  Morse code messages, mirror writing, invisible lemon-juice ink, and sign language in church were part of our kid language, in the same way that paper-cup-and-string telephones and writing our own musicals were things we just did.

You always think your own family is the norm, so I was surprised when I learned not all families communicate with literal codes.  I’m reminded of this frequently when I’m asked about the codes in my books.  Coming up with the codes for Birthmarked and Prized wasn’t particularly hard.  For the first one, I combined a couple of codes I used as a girl, and for the one in Prized, I noodled around a bit with what I wanted to say and how it appeared on the page.  It was fun.

As I was putting my blog tour together, one of my blogger friends, Rachael of The Book Muncher, asked if I would come up with a code for my visit to her site.  As we brainstormed in emails back and forth, and as my publicist at Macmillan weighed in, we realized it would be more fun to spread out the code over the sixteen days of the tour, with part of the code being revealed on each site.  The final installment and the solution to the secret message would appear on Rachael’s site on the last day. Nice, right?

How it works is simple.  A letter will be posted each day.  Followers can decipher each letter using the key on page 201 of Birthmarked to decode the message. 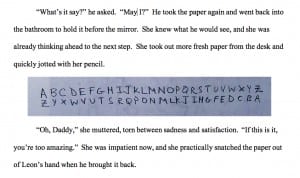 Page 201 of Birthmarked, as in the original manuscript. *Key for the Prized Blog Tour Code*

Incidentally, I’m posting the key here, too, for people who don’t have a copy of Birthmarked handy.

I suppose by now you’re itching to go write a code of your own, and I say, go for it.  Anyone can invent a code.  In fact, it’s as much fun or more to be the game-master than it is to be the one who plays the game.  I could say the same thing about writing and reading a novel, too.

For an example of how to think about a code, these are essentially the parameters I invented for myself:

A. Come up with a code that can last sixteen days.

B. It should be fairly easy to decipher with the right key, but not obvious on its own.

C. The secret message should say something that matters enough to make deciphering it worthwhile.

It sounds like fun, doesn’t it?  Watch for the Prized Code to begin with the blog tour next Monday, October 24th, on Mundie Moms.  More details about the Prized Blog Tour, Code and Chat will be posted on MacTeenBooks this Friday, October 21st.